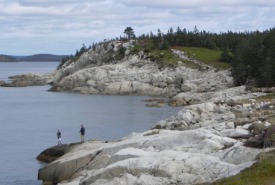 Prospect High Head is a popular coastal location for hikers, photographers and birders! The Nature Conservancy of Canada has been working here since 2001, protecting 151 hectares (372 acres) for the area's important coastal barrens and forest. The property provides habitat for native species and also migratory birds. The coastline is used by a variety of sea ducks, including eye-catching harlequin ducks, black scoters and long-tailed ducks.

A tribute to Dr. Bill Freedman

This Nature Conservancy of Canada site is dedicated to Dr. Bill Freedman, a long-time contributor to the organization. He was an ecologist and former Chair of the Department of Biology at Dalhousie University, where he also served as professor emeritus.

Dr. Bill Freedman passed away on Saturday, September 26, 2015 at his home in Halifax after a courageous battle with cancer. He was 65 years of age.

The Nature Conservancy of Canada has established the Science in Conservation Internship in Dr. Bill Freedman’s name.  It will support one Dalhousie University student each year.

To learn more or to make a contribution, please contact the Nature Conservancy of Canada at 1-877-231-4400.

The dedication of the site for Dr. Bill Freedman was covered by some media, including the Halifax Chronicle Herald daily newspaper. 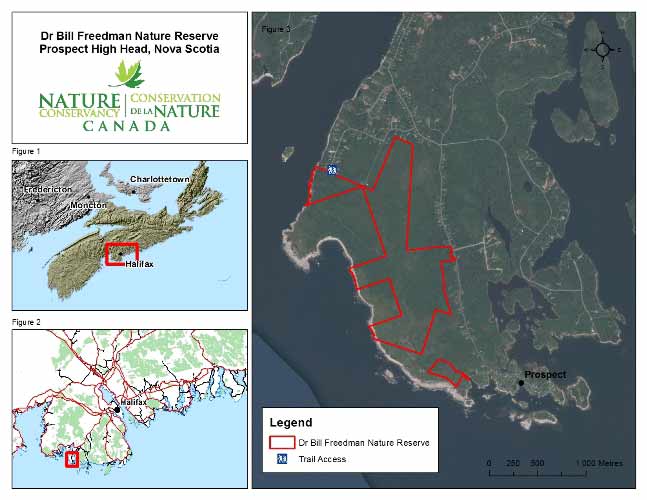 The Dr. Bill Freedman Nature Reserve is considered a key site in Nova Scotia because it is a relatively undisturbed piece of coastal landscape with granite barrens.

The area is made up of eight different types of habitat:

Of these, two of the most important types of habitat from an ecological point of view are the granite barrens and the coastal forest.

The granite barrens play a vital role in the environment by purifying massive amounts of ground water prior to its re-entry in the ocean. Most of Prospect High Head drains directly into coastal waters. These coastal waters are important to biological productivity of the marine communities. Slope or runoff waters influence plankton production in feeding areas for whales, dolphins and seals.

The barrens' exposed bedrock, thin acidic soils and rock outcrops restrict tree and vegetation growth. Therefore protecting this forest is important. It provides habitat for white-tailed deer, snowshoe hare, racoon and porcupine, along with birds such as ruffed grouse.