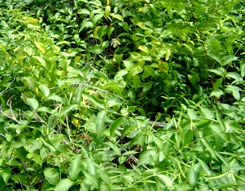 What are invasive species?

Invasive species are plants, animals and micro-organisms that are not native to an area but have been introduced to it, either intentionally or unintentionally (for example through ballast water or the trade of international goods). Non-native species can become invasive species if there are no native predators to control them. They can outcompete native plants and animals and alter how ecosystems function.

In fact, the International Union for the Conservation of Nature considers invasive species to be the second most significant threat to global biodiversity after habitat loss.

Why are invasive species harmful?

How do invasive species spread?

What is NCC doing to combat the spread of invasive species?

The Nature Conservancy of Canada (NCC) uses an integrated management approach to managing invasive species on our properties.

Depending on the situation, a combination of approaches may be necessary.

In every instance, the situation is studied carefully and options weighed, considering the impact of each method before they it is applied.

Once a strategy is implemented, NCC staff regularly monitor the area to see how effective the strategy is at reducing the population of invasive species and whether new methods may be required.

Every single one of the 200 million European starlings found today in North America are descendants of approximately 100 birds introduced to New York City's Central Park in the early 1890s by a society who wanted to introduce all of the birds mentioned in the works of Shakespeare to North America.

The rapid increase in population sizes of the European starling resulted in the displacement of native cavity nesting birds such as eastern bluebird. Thankfully, while the eastern bluebird was listed as rare for many years, it has since recovered due to bird box programs.