The bald eagle is an icon of strength and courage, and a beloved symbol in North American culture. Did you know that if a bald eagle loses a feather on one wing, it will shed a feather on the other wing in order to keep its balance?

This regal bird is far from bald; it derives its name from the word "piebald," meaning patchiness of two colours, in reference to the eagle's white head and tail, and dark brown body. Adult birds sport bright yellow legs and bills.

Juvenile bald eagles have mostly dark heads and tails, and are often mistaken for turkey vultures or golden eagles. It takes four to five years for them to reach adult colouring. 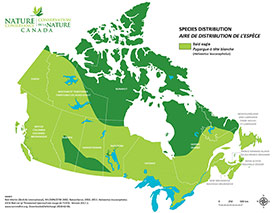 Where does the bald eagle live?

Bald eagles are distributed from the west to east coast, ranging from Canada’s boreal forest to northern Mexico, covering a range of approximately 2.5 million square kilometres. They rely on forested areas close to lakes, rivers, marshes and coastal habitats. Much of Canada's bald eagle population lives in coastal British Columbia, with inland populations found in boreal forests across the country, and populations throughout Atlantic Canada. They also require large trees for nesting. In wintertime, bald eagles can be found in parts of southern Canada, along bodies of water that do not freeze.

What is the bald eagle's conservation status?

Bald eagle is currently not listed as an at-risk species and have healthy populations throughout most of its range, but this was not always the case. Historically, this species declined as a result of habitat loss and unintentional DDT poisoning. Public education, habitat conservation and regulations have all helped bald eagle populations recover. Today, researchers, conservation groups and citizen science programs continue to monitor these impressive birds.

What is NCC doing to help protect the bald eagle's habitat?

The Nature Conservancy of Canada (NCC) is contributing to the overall protection of this species by securing and stewarding key bald eagle habitat.

Since the 1990s NCC has been on the forefront of efforts to protect core habitat for largest recorded concentration of wintering bald eagles in North America. In the small community of Brackendale, British Columbia, just north of Vancouver, bald eagles congregate by the thousands from November to March to feast on the abundant salmon spawning in the Squamish and Cheakamus rivers. In partnership with the Cheakamus Centre, an outdoor environmental education centre, NCC placed a conservation covenant on the centre’s 170-hectare (420-acre) property along the Cheakamus River, ensuring protection of its old growth forest and salmon-rich riverfront in perpetuity.

NCC also participated in a local campaign to educate the public about how to respectfully view the eagles of Brackendale, which included the construction of a viewing shelter and interpretive signs. A highlight each year comes in January when the community gathers for the annual Eagle Count, a popular event dating back at least to 1986.

Protecting a core bald eagle habitat while also educating the public not only helps this iconic bird, but also benefits many other species and adds to the overall integrity of the ecosystem.