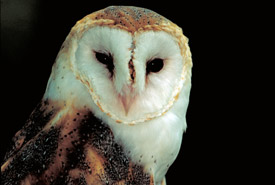 The characteristic pale, heart-shaped face of the barn owl easily distinguishes it from other owls. These medium-sized owls have a wingspan of 100-125 centimetres (39-49 inches) and weigh less than one kilogram (two pounds). Barn owls have long legs and can measure up to 40 centimetres (16 inches) tall.

The barn owl exhibits a rare phenomenon in the animal kingdom, with females who are showier than males. The female's breast has a more reddish chest that is more heavily spotted than the males. This is thought to indicate the female's quality as a mate, and studies have indicated that heavily spotted females may be more resistant to parasites and diseases. 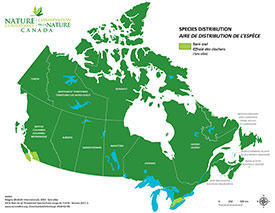 Where does the barn owl live?

The barn owl can be found on all continents except Antarctica. Despite its widespread distribution, the barn owl is considered an endangered species both federally and provincially (Ontario). Part of this situation arises from the fact that this year-round resident is at the northern limit of its range in the southern parts of Ontario and British Columbia. In these areas, severe winters and snow can affect prey availability. In fact, the barn owl was believed to have been extirpated from Ontario until 2000 when two sightings were reported. Another factor limiting the barn owl's distribution in Canada is a lack of suitable habitat.

Barn owls nest in empty cavities both natural and man-made, including hollow trees, cliffs and buildings such as barns, silos and abandoned structures. Thankfully, because barn owls are such good mousers they are a welcome resident on farms across Ontario. A barn owl family (two adults and six young) can catch upwards of 1,000 mice in one nesting season! Barn owls are accomplished nocturnal hunters and tests have shown that by using sound alone, these amazing owls can locate prey in a completely dark room and under snow. The barn owl is predated by great horned owls, opossums and raccoons.

Unlike other owls that typically hoot or whistle, barn owls produce a range of bizarre noises, from hisses to screams. You can listen to the barn owl's call at the Cornell Lab of Ornithology's All About Birds website.

Want to help the barn owl?

Habitat protection is also important for barn owls, which can be found in a diverse range of habitats, from marshes and grasslands to agricultural fields and deserts.