The golden eagle is one of the biggest and fastest birds of prey in North America, weighing 2.5 to seven kilograms and diving at speeds of over 240 kilometres per hour.

The golden eagle is dark brown with golden-brown feathers on the back of its head and neck, which explains how it got its name. 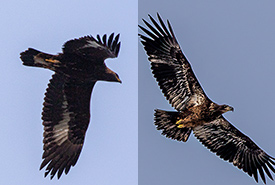 Immature eagles are distinguished from full-grown adults by the white patches at the “wrists” toward the wing tips, whereas adults wouldn’t have white at all. Immature bald eagles can be distinguished from young golden eagles by the white feathers near their armpits – young golden eagles have white patches towards the wing tips instead.

Unlike the bald eagle, this raptor’s legs are completely covered in feathers up to its feet, which have sharp talons. This species has a wingspan ranging from 185 to 220 centimetres. 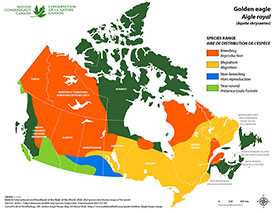 Where does the golden eagle live?

This bird of prey is found throughout much of the northern hemisphere, including North America, Asia, northern Africa and Europe. While their preferred habitat is open country near mountains, hills and riverside cliffs, golden eagles are found in a variety of habitats, ranging from the Arctic to the desert. Although they usually nest on cliffs, they also do so in trees, on the ground and on human structures, such as telephone poles. Not all golden eagles migrate, but most in northern and eastern Canada usually fly south in the autumn.

What does the golden eat eat?

The golden eagle’s diet is extremely varied. While they typically hunt small mammals, such as rabbit, hare, ground squirrel, prairie dog and marmot, these fearsome predators can also kill larger prey, including crane, swan, deer, seal, mountain goat, bighorn sheep, pronghorn, coyote, badger and bobcat. These raptors search for prey while soaring high in the sky, flying close to the ground or from a perch. Once they’ve spotted their potential prey, they use their talons to capture it. Golden eagles also feed on carrion, catch fish, steal from nests and take food from other birds.

What is the golden eagle's conservation status?

Fortunately, golden eagles not listed as a species at risk in Canada. In Ontario, the species is listed as endangered on the Species at Risk in Ontario List under the Endangered Species Act.

Golden eagle populations are threatened by the poisoning of prey through toxic chemicals or lead as a by-product from hunting, collisions with vehicles, wind turbines and other structures, as well as electrocution from power poles.

What is NCC doing to conserve the golden eagle's habitat?

The Nature Conservancy of Canada (NCC) owns several properties across the country where golden eagles have been observed during the breeding season and migration. Many of these properties are large, connected tracts of natural habitat, which provide the basic necessities for these large predators.

In Alberta, golden eagles can be found on many NCC properties throughout the province, such as Sandstone Ranch in the Milk River Ridge Natural Area, the Frayn property in Crowsnest Pass Natural Area, as well as the Waldron Conservation Project located in the Southern Foothills Natural Area. In Manitoba, NCC has partnered with the Manitoba government to expand Pembina Valley Park and also owns Jiggens Bluff II, a part of the Oak Lake/Plum Lakes Important Bird Area (IBA). NCC also manages eight properties in Rainy Lake to Lake of the Woods Natural Area, where golden eagles have been observed.

In Saskatchewan, golden eagles can be seen on NCC’s Old Man on His Back Heritage and Conservation Area, a property consisting of prairie grasslands, as well as properties in the Cypress Uplands and Missouri Coteau Natural Areas.