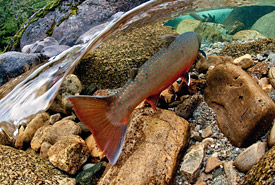 Part of the fish family that includes salmon and Arctic char, the bull trout received its name because of its large, wide head and pronounced upper jaw, similar to that of a bull. Its long, slim body is olive-green to blue-grey, with pale round spots on its back and sides. When males spawn, their pale bellies may turn red, orange or yellow. Where food is abundant, the bull trout can weigh more than 10 kilograms.

There are four different bull trout forms based on its life history: stream resident (spends its life in streams or small rivers), fluvial (moves from streams to larger rivers to rear juveniles), adfluvial (matures in lakes and migrates up streams to spawn) and anadromous (migrates from freshwater streams where it was born to feeding habitat in the sea). The South Coast British Columbia population is the only anadromous life-history type in Canada. 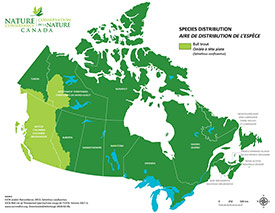 The bull trout occurs in western Canada, including BC, Alberta, Yukon and Northwest Territories, as well as the American Pacific northwest. It is a cold-water species found in lakes, rivers and streams. The South Coast British Columbia population is found in five large river systems: Skagit River, Squamish River, Lillooet River, Lower Fraser River and Lower Fraser Canyon. Fish within this population migrate to the Pacific Ocean to feed.

The bull trout prefers to spawn in cold, clear, small, flowing mountain and coastal streams with loose gravel and cobble at the bottom. Juvenile fish are usually found in shallow side channels and move into pools as they grow. Most bull trout spend winters in deeper pools to avoid ice.

The Committee on the Status of Endangered Wildlife in Canada has identified four different populations of bull trout in Canada. The Pacific population in BC is not at risk, and the South Coast British Columbia and Western Arctic populations are special concern. The Saskatchewan-Nelson Rivers population that lives in Alberta is at the greatest risk and has been assessed as threatened.

Major threats to this species include habitat loss along streams and rivers; dams and barriers that stop their migration; and introduced species such as brook trout, a species known to displace bull trout, compete for space and resources and decrease bull trout’s reproductive capacity by interbreeding. Bull trout are highly sensitive to change and are good indicators of healthy freshwater habitats.