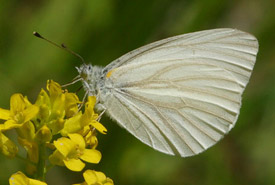 The West Virginia white is one of the first native butterflies to emerge each spring.

Only three key areas in Ontario support West Virginia whites: the Frontenac Arch, Manitoulin Island and the Halton/Hamilton area. Populations of this species have been found on several Nature Conservancy of Canada (NCC) properties in Ontario.

The species' beautiful white wings appear translucent in the light of the sun, with the grey-brown wing veins looking like a pattern of intricate lace. At just three to four centimetres, the west Virginia white can be easily overlooked. This small butterfly never strays far from its preferred larval food source — native two-leaf toothwort, and cut-leaf toothwort to a lesser extent.

The West Virginia white is listed as an at-risk species not only in Ontario, but also in several of the United States. It is considered rare just about anywhere throughout its North American range. Globally, it is considered vulnerable.

The West Virginia white will not cross open areas and prefers the habitat of moist deciduous woodlots where toothwort can be readily found in the forest's understory. Because the species refuses to cross open areas, its sensitivity to forest fragmentation is a factor that is considered a serious threat to its survival.

But something else is troubling this globally rare and provincially listed butterfly. Its food source is dwindling and its larvae are dying. The culprit? Garlic mustard. It was also rare before garlic mustard because of habitat fragmentation: it won’t leave the forest and fly across roads or fields.

The importance of biological inventories in locating species at risk like West Virginia white is reflected in NCC's commitment to long-term management planning. NCC identifies rare species and the threats to them in order to implement control measures for reducing the impact of identified threats.

In the case of the West Virginia white, NCC is actively working to reduce habitat fragmentation, and to control garlic mustard populations in our own protected areas as well as surrounding areas. NCC participates in invasive plant working groups, attends conferences and produces reports on garlic mustard and other threatening invasives.

By working with partners, landowners and volunteers, NCC is making an impact in the fight to control garlic mustard. This work benefits not only the West Virginia white, but all native species, plant and animal alike, including eight other rare butterfly species, two of which have already been extirpated (locally extinct) from Ontario.