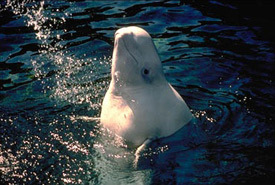 Beluga whale (Photo by the National Oceanic and Atmospheric Administration)

Beluga whales are born dark grey or brown, eventually turning white between the ages of six and eight. They have pronounced, rounded foreheads and lack dorsal (back) fins, enabling them to easily travel under ice. Adults are typically 2.6 to 4.5 metres long and can weigh up to 1,900 kilograms. 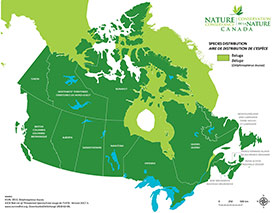 Beluga whales occupy northern waters, including those of Alaska, Canada, Greenland, Norway and Russia. Of the world’s 22 existing beluga whale populations, seven have been identified in Canadian waters. They occur in the St. Lawrence estuary, Hudson’s Bay and the Arctic Ocean. This species’ habitat depends on the season and the progression of ice breakup and freeze.

When ice starts to break up in late spring, beluga whales travel in groups, called pods, alongside ice edges and large sea ice fractures toward their summer habitat, which consists of shallow coastal waters and estuaries. When summer turns to fall, they swim to deeper waters. When winter arrives, pods move to offshore areas, where they live in ice leads, which are narrow, linear cracks in ice, and open areas in the sea ice called polynyas.

The beluga whale is a top predator, feeding on more than 50 different small fish and invertebrate species, including Arctic cod, Greenland halibut, Arctic char, shrimp, squid, octopus, snails and marine worms. Each day, a single beluga can consume up to three per cent of its body mass.

What threatens this species?

This species faces many threats, including pollution, decreased prey availability, human disturbance, habitat degradation, being hit by ships and becoming entangled in fishing nets. Some populations may also be negatively affected by noise pollution from ships, as it can mask the sounds belugas make during echolocation.

According to the International Union for Conservation of Nature, beluga whales are near threatened globally. In Canada, the seven populations have been assessed separately by the Committee on the Status of Endangered Wildlife in Canada. Some populations, such as the St. Lawrence Estuary population, have been designated as endangered. Other populations, especially in the far north, are not yet at risk.

On June 8, 2016, Shell Canada contributed more than 860,000 hectares (8,625 square kilometres) of offshore rights in the waters of Baffin Bay, near Tallurutiup Imanga/Lancaster Sound, an area inhabited by beluga whales, to the Nature of Conservancy of Canada. NCC has released the rights to the Government of Canada so that a National Marine Conservation Area can be established.