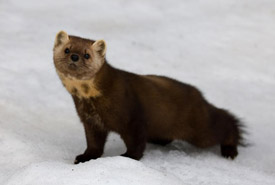 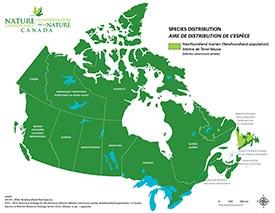 The American marten (Newfoundland population), also known as Newfoundland marten, is found only on the island of Newfoundland. Due to its geographic separation, this species is genetically distinct from its mainland cousins. This rare member of the weasel family is a forest-dweller who prefers conifer forests, where it hunts for its preferred prey, the meadow vole, under the forest’s thick canopy. It makes its home in dens, crevices and hollowed trees. Contrary to its small stature, the marten actually needs a large territory in which to live — between 10-30 square kilometres.

The American marten has a slender body, short limbs and a long bushy tail. Its dark brown fur is contrasted by a distinctive orange patch on its throat. Swift but small, these skilled hunters weigh about a kilogram and measure around 50-60 centimetres in length.

The marten is primarily a carnivore — meaning that it eats other animals. Its diet is comprised of voles, hares, shrews, squirrels, birds, insects, fish, with the occasional berry.

With a population between approximately 440 and 850 it is no surprise that the marten is at risk, both nationally and provincially. The species was listed as endangered in 1996 by the Committee on the Status of Endangered Wildlife in Canada (COSEWIC). In 2007 the status was changed to threatened due to an increase in population. However, the species still faces many threats to its continued survival, including incidental snaring and trapping, competition for food, predation and loss of habitat. In 2022, the American marten's status has been upgraded to special concern by COSEWIC.

Habitat protection is key to the recovery of this species, including NCC’s Lloyds River Escarpment, the Grasses Nature Reserve, Terra Nova National Park and the Little Grand Lake reserve complex.

Through the protection of large tracts of land in prime marten habitat, the Nature Conservancy of Canada (NCC) is helping to protect the undisturbed, mature forest that the Newfoundland marten needs to thrive. NCC’s Lloyds River Escarpment, and most recently the acquisition of the Grasses Nature Reserve in southwest Newfoundland, will help to ensure that this distinctive Newfoundland species will have the space it needs to hunt, mate and roam now and into the future.