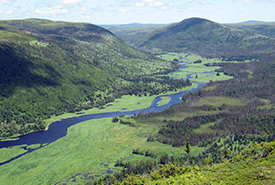 View of the Grasses Nature Reserve, Newfoundland and Labrador (Photo by NCC)

The Grasses Nature Reserve is nestled within a deep valley at the headwaters of Robinson’s River in southwestern Newfoundland. This remote 1,570-hectare nature reserve is 25 kilometres from the town of Stephenville Crossing and is situated along the Long Range Mountains, the most northerly extension of the Appalachian Mountains in North America.

The Nature Conservancy of Canada (NCC) has long identified The Grasses as an area of ecological significance. The area is named after its extensive natural riverside grasses, which can grow up to 1.5 metres tall. In 1908, the grassy meadows here were managed by the original landowners and supported herds of grazing sheep. On March 15, 2011, NCC purchased the property from one of the original owners, the Pawlett family. The Grasses is one of the largest projects that NCC has undertaken in its half-century of conservation in Atlantic Canada.

The Grasses Nature Reserve is the most extensive example of natural grassland and the largest wetland centred along a river in Newfoundland and Labrador. The largest wetland of its type in the province, it provides habitat for several rare plant species, such as Farwell’s water milfoil, necklace sedge, trailing arbutus, cow wheat, interrupted fern and podgrass. In total, 206 vascular plants have been observed and recorded along with five types of lichens.

In 2008 and 2014, NCC conducted studies in search of the provincially threatened Newfoundland pine marten. The studies confirmed that the surrounding forested areas are indeed critical habitat for the pine marten. Other wildlife frequenting the area include caribou, black bear and a diversity of forest songbirds and waterfowl.

La Poile woodland caribou herds arrive here in the hundreds to forage on sedges and grasses during the early summer and fall months. The area also serves as a breeding ground for large groups of Canada geese and smaller numbers of black duck, green-winged teal and merganser. Rare and uncommon birds, such as olive-sided flycatcher, rusty blackbird and winter wren, have also been documented in The Grasses. The nature reserve is surrounded by Crown land and is just to the south of the provisional Barachois South Ecological Reserve (487 square kilometres) and Barachois South Transitional Reserve (423 square kilometres), providing large-scale connectivity for a host of wildlife. The surrounding slopes of the river valley reach up to 100 metres in height, and at the southern plateau an impressive panoramic view of the entire area can be appreciated for its vast openness. From here, visitors can view the braided channel of Robinson’s River bisecting the nature reserve. The landscape is dotted with ponds and shallow open pools within the wetland complex.

NCC recognizes the generous contributions from our funders, whose participation was essential to facilitating the creation of this private nature reserve: