Running through the Prairies at up to 60 kilometres an hour, the swift fox is aptly named.

Swift foxes are North America’s smallest canid species. They are about the size of a housecat and weigh up to three kilograms. Their fur is pale, yellowish-red and grey, with a thick grey stripe down its back that extends to its black-tipped tail. Their underside is lighter in colour, and they have black patches on either side of their muzzle. Swift foxes are smaller than red foxes and have lighter colouration 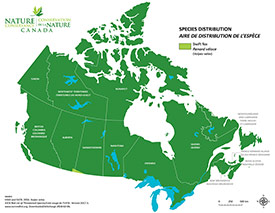 This species ranged from southern Alberta and Saskatchewan, south into Texas and New Mexico. Today, swift foxes only occur in about three per cent of their historic Canadian range as of 2009. Many populations are now isolated.

In Canada, swift foxes are now found in only a small area of prairie grasslands in southern Alberta and Saskatchewan. More than 80 per cent of Canada’s native prairie grasslands have been lost, and they are continuing to disappear. The protection of these grasslands is critical to the survival of the swift fox and other species that depend on this habitat.

Because swift foxes spend more time underground than any other canid species, their dens are important to their survival. They use their dens year-round for protection against predators and as a place to raise their young.

Swift foxes hunt mainly at night. They will, however, sun themselves near their dens during the day. They primarily feed on rodents, but will also eat birds and their eggs, insects, plants and carrion.

This species is classified as threatened under Canada’s Species at Risk Act and is still at risk due to habitat loss and fragmentation. Swift fox populations are also limited due to predation by coyotes and golden eagles, as well as competition with coyotes and red foxes. Poisoning is also a threat to swift fox. Historically, the species has been targeted as part of predator control programs, but it is now illegal to target them. The species is still at risk of accidental poisoning through actions to control rodents and other predators; however, there are federal and provincial regulations and rules to minimize the use of poison to control rodents and predators where swift foxes occur.

The return of swift foxes is one of the most successful species reintroduction stories in Canada. Once abundant in the short- and mixed-grass prairies of southern Alberta, Saskatchewan and southwestern Manitoba, they were no longer found in Canada by 1930. This was primarily the result of habitat loss, due to conversion of grassland to agriculture.

In 1973, a privately run program began breeding swift foxes in captivity in the United States, so that they could eventually be reintroduced back into the wild in Canada. With the help of federal agencies, non-governmental organizations and academia, including the Cochrane Ecological Institute and the Calgary Zoo’s Centre for Conservation Research, the program has been one of Canada’s most successful species reintroductions. The first captive-raised swift foxes were reintroduced along the Alberta–Saskatchewan border and the Milk River Ridge areas in 1983. These foxes survived, and over the years more captive-bred animals were reintroduced into the wild. Between 1983 and 1997, more than 900 animals were released in Alberta and Saskatchewan.

According to a report by Committee on the Status of Endangered Wildlife in Canada, there are approximately 523 swift foxes in Canada. This population appears to be stable, and is now connected to populations in Montana. The Canada-Montana population is separated from the rest of the range in the U.S.

The Nature Conservancy of Canada’s (NCC’s) landscape-scale work in prairie areas, such as in southeastern Alberta, is helping protect swift fox habitat.

In 2018, a swift fox den was discovered on an NCC conservation site in southeast Alberta. This discovery is proof that the work of conservation organizations like NCC to secure and steward privately owned land is helping species at risk — in this case, providing a home to support this threatened species. NCC is taking a very hands-off approach and allowing this family to grow and thrive from a distance. We check back annually for signs of activity, and passively monitor the den site from time to time using wildlife cameras installed in the area before pups are born.

Swift fox has also been seen at Old Man on His Back Prairie and Heritage Conservation Area, with the most recent sighting in 2019. By working together with local communities, other land trust organizations and private landowners, NCC will continue to conserve and steward these lands to ensure animals like swift fox still have wild places to live.