The Townsend's big-eared bat is a species of vesper bat. It eats large amounts of mosquitoes and other flying insects during its nightly feedings.

The Dumbo of bats

Named after American naturalist John Kirk Townsend and for its large ears (which average almost four centimetres long), this species can be found in caves and coniferous and deciduous forests in western parts of North America. In Canada, this bat resides in southern BC, from Vancouver Island east to Cranbrook and north to Williams Lake.

Bats use a navigational sound system — called echolocation — to forage for food and locate roosting sites. Bats with larger ears bats, such as the Townsend’s, tend to pick up lower frequency sounds than those with smaller ears.

The Townsend’s big-eared bat’s year-long reproduction cycle begins and ends in the summer, with mating occurring from November to February. Despite this, the female bat does not conceive until spring. This process, called delayed fertilization, allows mating to occur when adults are in top physical condition, and postpones birth until early the next summer when foraging conditions peak. 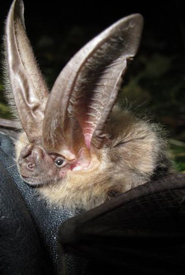 Pregnant female Townsend’s will form maternity colonies in caves, mines or abandoned buildings. They live in these colonies from early spring to summer, with each female giving birth in June to a single pup. Meanwhile, male bats live in solitude or in small bachelor clusters.This low birthing rate, plus additional factors such as their small population size and vulnerability while roosting, puts Townsend's big-eared bats at risk.

The caves of Chase Woods Nature Reserve on Vancouver Island are home to several bat species, including the Townsend’s big-eared. By conserving land here, the Nature Conservancy of Canada (NCC) is helping to ensure bats have safe places to roost, hibernate and birth their young.

To protect the roosting and hibernating bats from curious intruders, NCC helped secure the entrance of the Queen Victoria Mine near Nelson, BC in 2010. Closing off roosting areas helps protect the area from the introduction of white-nose syndrome, a fungus deadly to bats.

This species was first featured in the Nature Conservancy of Canada Magazine's summer 2016 issue.