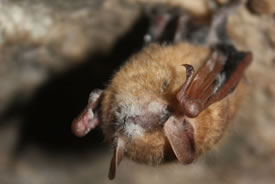 The tri-colored bat, formerly known as the eastern pipistrelle, is one of 18 bat species in Canada. It has pale brown fur, weighs around seven grams and has a wing span averaging 23 centimetres. Its muzzle, forearms and ears are orange-red and the sides of its wings and body are dark brown. This species gets its common name from the hairs on its back, which are black, yellow and brown.

This tri-colored bat ranges from eastern North America to Central America. In Canada, it occurs in New Brunswick, Nova Scotia, Quebec and Ontario. In summer, it can be found in various forested habitats, establishing maternity colonies and day roosts in trees and sometimes in barns or other structures. This species hibernates from October to April in the warmest and moistest parts of caves, mines or tunnels. It usually roosts solo instead of in groups.

The tri-colored bat is endangered in Canada, mainly due to white-nose syndrome, a fungus that thrives in cool, moist environments and infects the exposed skin of the muzzle and wings of hibernating bats. The fungus causes bats to use more energy than they can afford during hibernation and to wake up more frequently than healthy bats, often resulting in their death. Scientists believe that white-nose syndrome is spread mainly from one bat to another, but also believe that it is quite possible that it may be transmitted by humans carrying the fungal spores or the fungus itself from cave to cave on their clothing, boots or hiking gear.

The tri-colored bat’s Canadian range falls completely within the current known range of the white-nose fungus. As a result, the risk of this species becoming extirpated (no longer occurring in the wild in a particular region) is higher than that of little brown myotis and northern myotis, which have larger ranges that extend beyond the current reach of white-nose syndrome.

Other threats to this species include chemical contamination, changes to forest structure, wind turbines and the eradication of maternity colonies and/or elimination of their roosts by people due to concern over rabies and histoplasmosis, noise and hygiene.

The tri-colored bat has been documented in only one natural area where NCC properties are located: the Western Lake Erie Islands in Ontario. By protecting this area, NCC is helping to create viable habitat where bats can hibernate, forage and raise their young.

Because so little is known about this species in Ontario, learning more about it is one of the first steps in its conservation. To learn more about tri-colored bat populations, NCC is also working with the Toronto Zoo on its Native Bat Conservation Program, which involves monitoring bats in Ontario.

To prevent extirpation of the tri-colored bat, it is important to reduce and/or eliminate white-nose fungus contamination of new sites. This means staying out of caves, mines or other places where bats may be roosting or hibernating. If you must enter these areas, it is crucial that you disinfect your boots and hiking gear beforehand.