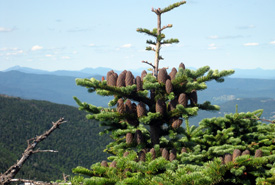 Balsam fir trees are medium-sized evergreen conifers. They are often used as Christmas trees because of their pleasant smell and the fact that their needles remain in place long after the trees have been cut. Their sap, or resin, is used in candles, soap and in manufacturing glue. Although they live, on average, for about 80 years, some balsam fir trees have been known to live for up to 150 years.

Balsam fir trees are tall and narrow, reaching heights of up to 25 metres and with trunk diameters of up to 70 centimetres. They produce barrel-shaped pine cones that are greyish brown and grow upright. Their flat needles are shiny and dark green, and have two white bands underneath. Balsam fir bark is smooth and waxy. The bark of young balsam fir trees is greyish and covered in sap blisters, while that of older trees is brownish. 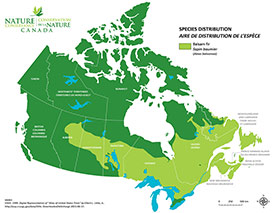 Balsam fir trees grow in various climates and soils in the northern forests of central and eastern Canada. Specifically, they range from Alberta to Newfoundland and Labrador, south to Wisconsin and New York. Although balsam fir are mostly a boreal forest species, they are also common in the Great Lakes-St. Lawrence and Acadian forest regions.

What is its ecological significance?

Many animals depend on balsam fir trees for shelter and food. Moose, for example, feed on its high-growing needles and twigs.

Fortunately, balsam fir is one of Canada’s more common and wide-ranging trees. Balsam fir forests sometimes host insect outbreaks, such as balsam fir sawfly and spruce budworm. While these outbreaks can damage stands of forest, they provide an important food source for songbirds.

NCC protects more than 100 properties where balsam fir trees grow, ranging from Newfoundland to Saskatchewan. The species occurs in a wide range of conditions, from the “fog forests” of Newfoundland’s Salmonier property, to the hardwood forests throughout NCC’s Ontario and Quebec properties.