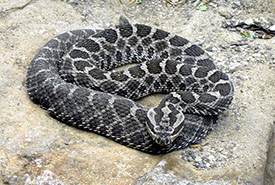 This is Ontario’s only venomous snake. Despite its fearsome reputation, the massasauga rattlesnake is shy and docile, and avoids human contact whenever possible.

If threatened, the species is most likely to rattle or retreat under cover. With a striking range of under 30 centimetres (12 inches), this snake uses biting as a last resort. Even when it does bite, it does not always inject venom.

Most massasauga rattlesnake bites in Ontario occur when people accidentally step on these snakes, or when they attempt to handle them.

There are only two recorded incidents in Ontario of people dying from a massasauga bite, and in both cases they did not receive proper medical treatment.

The massasauga rattlesnake does not grow very large. It is only 45-75 centimetres (18-30 inches) long, and is a short, stocky breed of snake rather than a long and slim one. It has a grey or tan coloured body with a row of large brown or black spots down the centre of its back and three small rows of spots down either side. This snake has a triangular head with three dark stripes running down the sides, and although it is a rattlesnake, its tail rattlers can occasionally fall off. The massasauga is the only snake in Ontario with a vertical pupil. But this should not be used as a means of identification because if this is how you are identifying the snake, you are obviously too close. 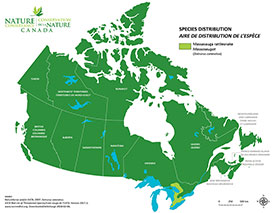 The only Canadian province in which massassaugas reside is Ontario, but their range stretches from New York to Arizona and Mexico. In Ontario, they can be found near the eastern shore of Georgian Bay, the Bruce Peninsula, the north shore of Lake Huron, Wainfleet bog and Ojibway prairie. Massassaugas live in a variety of habitats: swamps, marshes, forests, grasslands and rock.

There are three subspecies of massassaugas. The only one located in Canada is Sistrurus catenatus catenatus.

This rattlesnake has already been extirpated from the majority of its previous range across southwest Ontario and is now only found in a few areas. It is becoming rare in Canada, and is listed as threatened a threatened species under Ontario’s Endangered Species Act, the Committee of the Status of Endangered Wildlife in Canada  and the Committee on the Status of Species at Risk in Ontario.

Causes for this decline include persecution and loss of habitat, but most serious threat to this slow-moving snake is road mortality, both from accidental encounters and people who purposefully swerve to hit them.

The Nature Conservancy of Canada (NCC) is committed to protecting this species by protecting its habitat on the northern Bruce Peninsula and Georgian Bay by working on road ecology projects, conducting monitoring and working with other organizations such as Ontario Nature to conduct outreach programs.