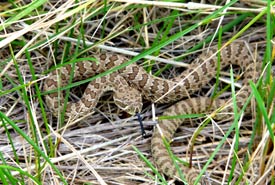 Prairie rattlesnakes have heart-shaped heads and can grow up to 1.4 metres in length. They are a yellowish-brown and have dark brown blotches covering the length of their body to help camouflage with their surroundings. They have a light-brown rattle at the end of their tail that they shake to scare away predators. Every time this snake sheds its skin, a ring develops around its rattle. This snake sheds its skin up to five times within the first summer of its life. After this period, it sheds its skin once or twice a year.

You are likely to hear this species before you see it. If exploring an area where prairie rattlesnakes are known to be and you hear a rattling noise, stop, look around and walk in the opposite direction.

In Canada, prairie rattlesnakes are known to live in southwestern Saskatchewan and southeastern Alberta. It is the only venomous snake found in the Prairies.

The Committee on the Status of Endangered Wildlife in Canada has assessed prairie rattlesnake as special concern. This assessment is due to the species’ steady decline since the 1930s from habitat loss, increased road mortality rates and projected losses as its grassland habitat continues to disappear.

The Nature Conservancy of Canada (NCC) is protecting habitat for this species across the Prairies, including in Alberta’s Badlands. NCC has collaborated with local landowners to ensure the long-term conservation of this area, and habitat for several species, including prairie rattlesnake.