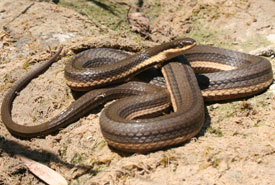 
Commonly thought of as cold-blooded and aggressive, most of Ontario’s snakes are actually quite elegant and good-natured. Take, for instance, the queen snake – the royal reptile.

Where are queen snakes found? 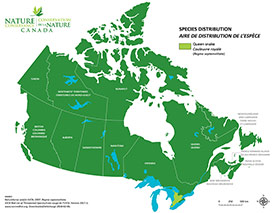 This semi-aquatic snake is non-venomous, seeking shelter in rocky, watery areas and feeding on crayfish. It is found in Ontario and the eastern United States, from Florida as far west as the Mississippi River.

Although they are difficult to spot, once found, queen snakes are quite easy to identify. The four stripes on their yellow belly are distinctive, as they are the only North American snake with a stripe running the length of their body. The species' olive-brown sides also show off a distinctive yellow stripe. At maturity, these slender snakes can measure between 60-90 centimetres long.

Sadly, the queen snake is endangered nationally and provincially. As with so many species at risk, one of the main threats to this species is habitat loss (including loss of hibernation sites), if waterways it requires for its survival are disturbed, polluted or drained. Crayfish, its main food source, are also particularly sensitive to pollution.

“Queen snakes have declined across large portions of their historic range, leaving some areas either without queen snakes or in very low densities,” says Scott Gillingwater, a species at risk biologist for Upper Thames River Conservation Authority.

In the summer of 2011, Gillingwater and Nature Conservancy of Canada (NCC) staffer Cara Copeland, along with a team of biologists, uncovered the existence of queen snakes at several sites along the Maitland River during a survey. The Lower Maitland River Valley Natural Area in Ontario, with its meandering river running through rocky riverbanks and tall limestone cliffs, provides ideal habitat for queen snakes.

“Finding queen snakes is a good sign that the Maitland River and its shoreline are still healthy,” notes Copeland, a conservation biologist in midwestern Ontario. “This summer’s surveys were an important step toward understanding this queen snake population.”

“However, we need to keep on increasing our knowledge of the distribution, abundance, life history and habitat needs of queen snakes in Ontario if we want to see a recovery of this species,” she adds.

With persistence and continued partnership with surrounding landowners, NCC may contribute to the resurgence of this regal reptile along the banks of Ontario’s waterways.