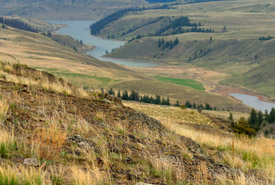 In the heart of the Nicola Valley, Napier Lake Ranch Conservation Area encompasses a mosaic of iconic native grassland habitats. Gently rolling hills covered in swaths of tall grasses hide the abundance of birds and other small animals that flourish here. Easier to spot are the hawks and falcons that circle in the sky above, searching for movement in the waving grasses below. Steep slopes give way to cliffs and rock outcrops, a favourite habitat for hibernating snakes and bats. Pockets of trembling aspen woodlands grow in the gullies here, providing shade and habitat for wildlife. 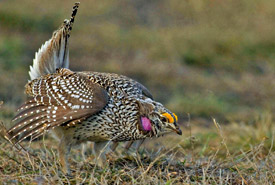 The conservation area is strategically located along a flyway for many species of birds. It connects to other conservation properties both to the north and south across the Douglas Plateau. This large area is designated as an Important Bird Area for its diversity.

The Napier Lake Ranch Conservation Area is an exceptional piece of a rare ecosystem complex that is rapidly disappearing from British Columbia.

The Napier Lake Ranch Conservation Area supports many iconic grassland species and the fragile habitat they depend on.

The Napier Lake Ranch Conservation Area also enjoys a long history as an active cattle ranch, dating back to 1873. The Jackson family has tended this land since 1974, when Agnes and her late husband, Roy, purchased the home ranch to pursue their dream of ranching. Now, after more than three decades of working and caring for the land, Agnes is looking to fulfill another dream of her family’s: to protect grasslands from development.

“Grasslands hold more endangered species than any other climatic zone,” says Agnes. “Keeping large tracts of land intact is really the only way to protect them. Cows, grouse and burrowing owls can all live together. We should encourage diversity, not monoculture.”