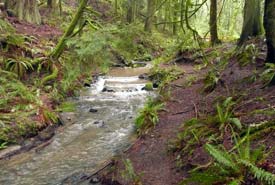 In contrast to most areas on the relatively dry Gulf Islands, the wet micro-climate on Jarrod's Grove Nature Reserve contains life that is more similar to the old-growth hemlock and cedar rainforests found on the West Coast of Vancouver Island. The deep ravine and continuous tree cover keep the land and creek at lower temperatures with higher levels of moisture, compared to the rest of Salt Spring Island. As a result, at-risk species, such as coastal cutthroat trout, red-legged frog and Pacific sideband snail, can survive here. The property has the only intact riparian habitat for salmon-bearing streams on Salt Spring Island.

The moss-draped trees and lush green ferns of Jarrod's Grove make for a popular walking destination for locals. It is also the site of a salmon enhancement project led by the Island Stream and Salmon Enhancement Society.

This property was ushered into conservation by the efforts of a committed group of Salt Spring Island citizens who were alarmed by a subdivision proposal on the land in 2005. Thanks to their awareness-raising and fundraising efforts, the property was purchased for conservation in 2008.

Jarrod's Grove Nature Reserve has been owned and stewarded by the Nature Conservancy of Canada (NCC) since 2015. The property was one of 26 conservation properties transferred to NCC from The Land Conservancy of BC in order to ensure their long-term protection.

These property transfers were made possible with the assistance of the Government of Canada’s Natural Areas Conservation Program, the Province of British Columbia and the Fish and Wildlife Compensation Program.