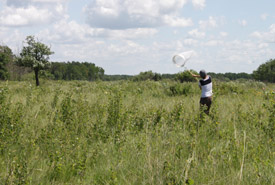 On September 30, 2020, Environment and Climate Change Canada (ECCC) announced it's investment of $1.9 million over fours years for the Nature Conservancy of Canada (NCC) and our partners to conserve species at risk within Manitoba's endangered Tall Grass Prairie Natural Area. Canada Nature Fund’s Community-Nominated Priority Places for Species at Risk is a $15.6 million, four-year funding initiative administered by ECCC to support community-led projects that protect and conserve species at risk.

This funding represents ECCC's support of NCC's approach to conservation through a multi-partner, landscape-scale approach that honours and incorporates the inclusion of people, economy and agriculture as integral to the successful conservation of species at risk in an endangered prairie landscape. Community-Nominated Priority Places in Manitoba is a culmination of a bi-national, landscape scale planning approach that began approximately 15 years ago. From its start, this planning recognized that conservation success in an agricultural landscape, by necessity, means taking a holistic approach and bridging biodiversity needs with local values.

This commitment to southeastern Manitoba is an honour and reflects the national importance of the area's habitats and species, and is a testament to the evoloving partnerships and shared vision among landowners, conservation organizations, governments and community members.

Funding through Community Nominated Priority Places will fund activities undertaken by several partners who will work together to improve habitat and mitigate threats to species at risk in the Tall Grass Prairie Natural Area as well as contributing to other co-benefits such as Pathway to Canada Target 1, provision of ecosystem services and climate change. NCC's Tall Grass Prairie Natural Area supports over 100 provincially rare or uncommon species, 20 nationally rare or uncommon species and 8 globally rare or uncommon plant communities. Several rivers and streams wind through the area, providing important habitat for over 50 species of fish and several molluscan species. Large mammals such as elk and wolves still roam across the landscape.

In the first year of the project, there has been an increase in the monitoring of many species at risk, hundreds of acres of habitat restoration, expanded grazing management with local producers, and the launch of  an ongoing joint community relations plan bringing partners together and increasing awareness, understanding and engagement as it relates to species at risk conservation.

The Assiniboine Park Conservancy released critically endangered Poweshiek skipperling butterflies. In addition, for the first time, the team successfully bred the tiny butterflies on-site at the Assiniboine Park Zoo. This has never been done before and is a critical development in the effort to save the species from extinction.