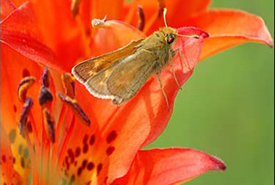 A gift of land by David Lacey in memory of his late wife, Susan, was the site of two exciting discoveries in the summer of 2020. Nature Conservancy of Canada (NCC) staff discovered the presence of the nationally endangered Dakota skipper butterfly and provincially endangered great plains ladies’-tresses orchid. Both of these species are of global conservation concern.

The 63-hectare (156-acre) property is located 11 kilometres southwest of the town of Oak Lake. It features mixed-grass prairie, wetlands and riparian habitat along the shoreline of Oak Lake. The orchid’s discovery expands its known range in Manitoba.

The identification of these species prompted NCC to quickly adapt their management plans for the summer. Staff adjusted the timing and location of planned haying to accommodate not only the discovery of these two species, but also other wildlife — including nesting waterfowl, endangered monarch butterflies, and the threatened bobolink — before developing a multi-species-at-risk-focused management plan.