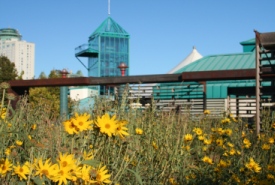 Just a stone's throw from the heart of Winnipeg, at the junction of the Red and Assiniboine rivers, lies the Nature Conservancy of Canada's (NCC's) The Forks Prairie Garden project.

In 1999, NCC partnered with the Forks Renewal Corporation and others to establish a demonstration garden that featured Manitoba's natural heritage, in anticipation of it being a showcase for visitors at the Pan Am Games. The project became so significant in its impact that it became a permanent feature at The Forks. Now, over 15 years later, the 20,000-square-foot garden features various native tall grass prairie grasses and wildflowers, providing visitors with a glimpse into Manitoba's natural history.

This project has become NCC's most frequently visited project in Manitoba with an estimated four million visitors passing through each year.

Only a low stone wall separates beds of bergamot, gaillardia and harebell from the steady flow of passing motorists, pedestrians and cyclists. Along one side of the carefully tended plots of native wildflowers and grasses, diners satisfy their appetites on lush salads, burgers and fresh pasta.

The scene is a far cry from the wilderness that once covered this bustling downtown crossroads. Centuries before the city arose on the riverbanks, The Forks was a meeting place for Indigenous peoples.

Further upgrades to the site will continue with interpretive signs and a larger gathering area in the plan, pending funding. In the meantime, make sure to check out The Forks Prairie Garden throughout the seasons to experience how the garden changes throughout the year. While you’re there make sure to take a picture and tag NCC in it throughout your social media (@NCC_CNC). We would love to see you enjoying the space!

NCC would like to extend our gratitude to The Winnipeg Foundation for their generous support.

The Forks Prairie Garden, supported by NCC and several other conservation partners, is a reminder of modern Winnipeg's prairie roots.