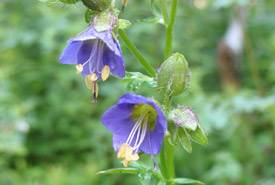 First identified in the province in the 1880s, the species was thought to be extinct in New Brunswick for decades until it was rediscovered in Charlotte County in 2005 by representatives of the provincial Department of Natural Resources and the New Brunswick Museum.

Van Brunt’s Jacob’s ladder is a delicate flowering plant that is a metre tall and produces showy purple, bell-like flowers during spring and early summer. It is only known to exist in a handful of locations in Canada; in New Brunswick and Quebec.

In August of 2013, the Nature Conservancy of Canada (NCC) discovered a new sub population of the plant, growing at only two sites in the province, at NCC’s Lower Bay of Fundy Natural Area.

About 85 plants were found on J.D. Irving, Limited lands beside a tributary of Dipper Harbour Creek. They were located along a stream bank after a four-hour search through the woods, wet areas, thick alders and shrubs. NCC identified and mapped the location for protection and a buffer area as part of JDI’s Unique Areas program.

In the wild, this plant would look very familiar to gardeners because it looks very much like the Jacob’s ladder commonly grown in flower gardens. It tends to grow in cedar swamps, which themselves are a somewhat rare forest type, containing other uncommon species. Van Brunt’s Jacob’s ladder will also grow near the edges of streams or lakes, often among alders.

Given this plant is at risk of extinction, the Nature Conservancy of Canada (NCC) has identified Van Brunt’s Jacob’s ladder as a priority for our conservation work. NCC has received funding through Environment Canada’s Habitat Stewardship Program to work with landowners on protecting this species.

Van Brunt's Jacob's ladder is quite easy to recognize, especially when it is in bloom between June and August. The purple bell-shaped flowers are quite distinctive and the plants grow up to three feet in height. The paired leaves seem to form a ladder up the stem.

NCC Conservation Biologist Josh Noseworthy explained why the finding of Van Brunt’s Jacob’s-ladder was important, comparing it to blocks in a Jenga tower.

“We have a lot of species, each one represented by a block. You can take out blocks here and there and the tower is not going to fall. But every time you do, the chances of the tower falling increase. It gets a little bit weaker. We want to keep our biodiversity in the province. We want to keep all those blocks and maintain some resiliency in our natural systems,” said Noseworthy.

“Aside from it being a beautiful flower, it’s part of New Brunswick’s natural heritage and the Nature Conservancy of Canada really strives to protect our species at risk because of that heritage and the natural legacy we have.”

In a story from the Old Testament, the name "Jacob’s Ladder" alludes to a ladder to Heaven, which Jacob saw in a dream. The plant was named in honour of a 19th century naturalist, Mrs. Cornelius Van Brunt.

Help us monitor and protect this plant!

Almost all the known sites where this plant grows are on privately owned land, so it is very important to involve landowners and communities in helping to protect this species. There might be more patches of this plant in Charlotte County that just haven’t been found yet.

Anyone who owns land in Charlotte County with wet areas along a stream or other waterbody can help us protect this plant and other wildlife by taking special care of these areas on their property.

Following provincial regulations on buffers when cutting trees near streams or lakes and avoiding traveling through wet areas with ATVs are great ways to protect the habitats and wildlife that live there.

What if you spot Van Brunt's Jacob's ladder?

If people you are out in the woods this spring and summer and come across this plant, please: