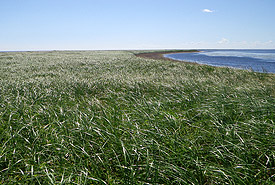 Did you know that Canada is home to approximately 25 percent of the world’s wetlands?

The Nature Conservancy of Canada (NCC) has protected thousands of acres of wetland throughout Atlantic Canada so that future generations may enjoy these pristine areas. As one of the most ecologically productive and biologically diverse areas, wetlands in Atlantic Canada have received international recognition and have even been declared Ramsar sites.

The diverse habitat of the wetlands in the Atlantic provinces includes salt and fresh water marshes, bogs and fens to name a few. The wetlands located in Atlantic Canada are home to a variety of common and rare aquatic wildlife, including:

NCC often works in conjunction with a variety of organizations that have the same goal of protecting these fragile ecosystems.

NCC has successfully acquired 930 acres (376 hectares) in the Tabusintac Estuary in the northern part of New Brunswick. This spectacular natural landscape of wild and pristine beauty was declared a Ramsar Wetland of International Importance in 1993 due to the large concentrations of migrating waterfowl it supports. It has also been declared an Important Bird Area.

Sheltered from the Gulf of St. Lawrence by 15 kilometres of sandy barrier beach, the estuary is home to some of the Acadian Peninsula’s most fragile residents. This estuary is a critical breeding site for birds and shelters the second-largest common tern colony in Atlantic Canada. This is also one of the few remaining places where the nationally endangered piping plover can nest and raise its young.

NCC’s  St. Peter’s Lake Run consists of salt marsh habitat, a large enclosed salt pond and dunes. The sandy beaches and salt marsh habitat attract many waterfowl and shorebird species, including the nationally endangered piping plover. The salt pond on the property is habitat for waterfowl such as:

On the inside shore there are wide flats where gulls rest and shorebirds feed. Other common wildlife in the area includes:

Pugwash's diverse ecosystems provide critical nesting, migration and wintering habitat for a variety of waterfowl and shorebirds. Wildlife species include:

The nutrient-rich waters in this estuary are a life-source for many mammal, bird and fish species.

The Grand Codroy River Estuary is one of the most productive of Newfoundland and Labrador’s few estuarine (estuaries are places where salt and freshwater mix)  wetland sites, and includes extensive intertidal sandbars and mudflats, parts of which support rich growths of eel-grass beds. The area was given international prominence in 1987 when it was added to the list of Wetlands of International Importance under the Ramsar Convention and is also declared an Important Bird Area.

The relatively benign climate and productive soil of the estuary is also evidenced by the presence of 27 rare vascular plants. Two rare species occur in the estuary:

The area is also well known to birders as a provincial hotspot for songbirds. For example, it is the only area on the Island of Newfoundland where the ruby-throated hummingbird is regularly known to occur.