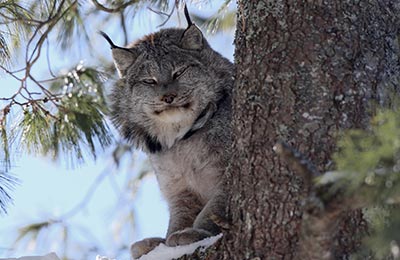 The Nature Conservancy of Canada (NCC) has an on-going and ambitious project to protect species in Nova Scotia and New Brunswick by conserving a wilderness corridor for wildlife. The Chignecto Isthmus is one of the most important habitats in the Maritimes: a crucial land bridge that serves as the only route for terrestrial wildlife to move in and out of Nova Scotia. This land bridge is especially important for moose, an endangered species in Nova Scotia.

While New Brunswick has a healthy moose population totalling more than 30,000, in Nova Scotia the mainland moose population has declined dramatically over several decades and is believed to be fewer than 500 individuals.

Our work in the Chignecto Isthmus, at a glance

NCC is committed to conserving habitat for the long-term viability of wildlife populations not only in New Brunswick and Nova Scotia but across eastern Canada and the United States.

NCC has secured 18 properties in the Chignecto Isthmus Natural Area, which total more than 1,200 hectares (3,000 acres). These properties are located in the Upper Tantramar Watershed, Halls Hill and Baie Verte in New Brunswick and near Amherst in Nova Scotia.

One of these projects was a land donation of 316 hectares (781 acres) in the Cookville area from Joan and Derek Burney. Kenneth Lund and his late brother Daniel Lund made two land donations of 90 hectares (222 acres) in Halls Hill. NCC also received a generous land donation near Amherst from Hollis Cole.

The Nature Conservancy of Canada has received generous support for these projects. Project partners have included:

Moose populations are healthy in New Brunswick. However, in mainland Nova Scotia they are endangered. The Chignecto Isthmus is a key link for moose habitat to ensure this species can be sustained.

The Chignecto Isthmus features an extensive system of swamps, lakes, marshes and bogs.

In addition to moose, other mammals and bird species found here include Canada lynx, bobcat and northern goshawk. The area is also a potential nesting site for American black duck, green-winged teal and wood duck.

Rare plants found on the Nova Scotia side of the Chignecto Isthmus include Halberd-leaf tearthumb and lesser wintergreen.

The Chignecto Isthmus is a narrow, sensitive corridor that, if not protected, would disrupt wildlife movement for many species in what conservation planners refer to as the Northern Appalachians-Acadia Ecoregion.

For more information and to learn how you can help, please contact NCC's Atlantic Region at 1-877-231-4400 or atlantic@natureconservancy.ca.