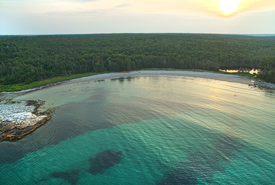 Land conservation is like working on a jigsaw puzzle — it is most strategic to add pieces to existing sections, and it happens faster when done together.

The Port Joli and Port L’Hebert peninsulas and surrounding area are home to one of the largest concentrations of coastal protected areas in the province, including the Kejimkujik National Park Seaside Adjunct National Park (2,417 hectares), Thomas Raddall Provincial Park (615 hectares) and the adjacent Port L'Hebert Nature Reserve (691 hectares). Even with this, there critical gaps that are open for development.

Since 2006, the Nature Conservancy of Canada (NCC) has been assembling properties, adding new pieces to this ecological puzzle. During this time, NCC has been successful in conserving 740 hectares. There is a new opportunity right now to add a large and strategic piece to the puzzle that will conserve 608 hectares on the Port L’Hebert Peninsula, creating the Haley Lake Nature reserve. With your support, this piece will be successfully conserved.

The Port Joli and Port L’Hebert peninsulas are recognized for their significant density of uncommon and rare cyanolichen species, including the globally rare, nationally, and provincially listed endangered boreal felt lichen and vole ears lichen, the provincially vulnerable blue felt lichen and the provincially threatened black-foam lichen, which is also a committee on the Status of Endangered Wildlife in Canada species of special concern. With multiple occurrences of these species in the area, this site is among one of the most significant sites for these rare and endangered lichens in Nova Scotia.

Double your impact; your gift will be matched dollar for dollar!