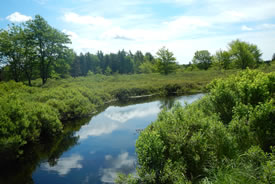 Nova Scotia's Long Tusket Lake has a unique human history. In the mid-1800s, the area was the site of the settlement of New France, or "Electric City" — so named because of the lit streets and houses that were made possible by an in-stream water-based power plant. Lights were a rare sight in those days, particularly in the backwoods of Digby County.

The Stehelin family emigrated to this area from France during the Franco-Prussian War. Over the course of several years, they established a successful timber enterprise on the banks of Langford Lake, just south of the donated lands.

The Nature Conservancy of Canada (NCC) in Nova Scotia recently announced that it had received a generous gift of land in the Long Tusket Lake area. It is NCC’s second significant conservation project in Digby County in 2013–2014.

These lands build on a NCC previous acquisition of 5,077 acres (2,055 hectares) of forest and wetland habitat in the immediate vicinity. Located in the Upper Tusket Watershed, the property is also upstream of globally significant plant communities.

In addition to the generous land donors, Paul Stehelin and Ann Poirier, who are leaving a legacy gift, NCC wishes to acknowledge funding support from the TD Bank Group through its TD Forests program. TD’s five-year contribution is the largest corporate commitment to NCC in the conservation organization’s more than 50-year history. With support from the TD Forests program, NCC will increase the amount of forested lands protected and cared for across Canada.