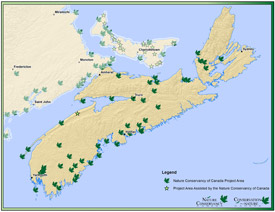 Our work in Nova Scotia (Click to enlarge the map)

Throughout picturesque Nova Scotia, from rural areas to Halifax County, the Nature Conservancy of Canada (NCC) is working to sustain the province's natural heritage for today and for our children and grandchildren. Using our conservation blueprints to guide our work, we are engaged in a number of exciting projects. From securing land, to restoring and protecting habitat, to managing and stewarding properties, we are making a difference.

Located within the Northumberland Strait, the Chignecto Isthmus is a narrow land bridge measuring only 15 kilometres wide that joins Nova Scotia to New Brunswick and the rest of the continent. It is an important ecological corridor for land-based species, and the only route for wildlife in and out of Nova Scotia. The Chignecto Isthmus also has an extensive system of swamps, lakes, marshes and bogs.

Our work in this region extends along the south shore of the strait from the Nova Scotia–New Brunswick border to St. George's Bay. This includes the watersheds that begin in the Cobequid Hills and flow to the strait. Piping plovers breed along the coast here. The coast’s productive eelgrass-filled estuaries provide spawning and nursery habitat for a many species of marine animals, including commercially important fishes.

Thanks to many caring individuals, the Pugwash Estuary Nature Reserve has grown and continues to grow — a beautiful haven in the present, and an extraordinary legacy for the future.

This natural area is designated as a biosphere reserve by the United Nations Educational, Scientific and Cultural Organization (UNESCO). This natural area has the highest biological diversity in eastern Canada. It features extensive and rich coastal ecosystems, a large network of freshwater lakes, rivers, streams and wetlands, and wide stretches of almost intact Acadian forest. These lands are home to important provincial and regionally rare and at-risk species, such as eastern baccharis, harlequin duck, bobolink, short-eared owl and willet.