www.natureconservancy.ca > Home > Where We Work > Ontario > Our Work > Stewardship 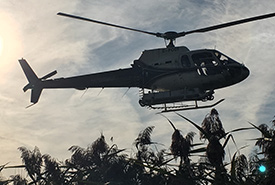 Helicopter over phragmites, Long Point, ON (Photo by NCC)

Phragmites is a non-native, invasive reed from Eurasia, and it is quickly spreading throughout North America. Found mostly in wetlands, this towering plant takes over moist areas, choking out all other life. It outcompetes native wetland plants, leaving frogs and turtles without vital habitat and blocking shoreline views and access.

Once introduced into an area, the plant's roots spread far and wide below wetlands in a vast network of rhizomes. Its seeds are easily wind-dispersed, allowing phragmites to further invade other habitats.

How to identify phragmites?

Although it grows mostly in wetlands, it can also be found growing in roadside ditches and on beaches and dunes. It can be hard to distinguish from its native counterpart, as they share similar features and habitat. 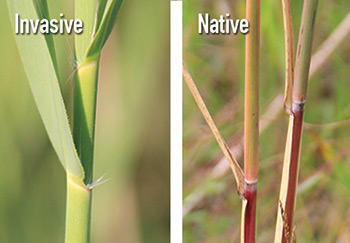 In 2017, the Nature Conservancy of Canada (NCC) hired its first ever invasive species program director for Ontario. This positioned NCC to substantially ramp up tackling the spread of what has been called Canada’s worst invasive plant, using an impressive variety of tools and techniques.

In a joint initiative with the Ministry of Natural Resources and Forestry, NCC has been combating this alien invader in the wetlands of Lake Erie in the Long Point region. In these areas — once home to countless waterfowl, species at risk and other wetland-dependent plants and animals — the infestation is so advanced that the only method to successfully restore this damaged habitat involves the use of a Health Canada and EPA-approved herbicide imported from the USA. 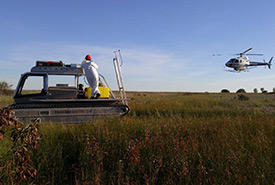 Tightly controlled and monitored by Health Canada’s Pest Management Regulatory Agency and the Ontario Ministry of Environment, Conservation and Parks, this treatment is used in emergency situations where phragmites has altered the environment so much that virtually nothing can live there. Similar programs have been used on the American side of the Great Lakes with resounding success. Extensive monitoring of plant, animal and insect populations, as well as water quality testing, is conducted before and after the product is used to ensure the environment and water supply remain safe.

Between 2016 and 2018, more than 1,100 hectares (2,700 acres) were treated through the use of a helicopter and marsh master (an amphibious vehicle that allows conservation staff to access areas infested with phragmites). This was a monumental task, with equipment challenges, tough working conditions and significantly more phragmites to treat than anticipated. But there is good news. Early aerial surveys already show marked improvement with more open water habitat and dramatically less phragmites. Once treated, follow-up often involves cutting, rolling and/or burning of standing dead stalks to allow native plants to re-establish. Any surviving phragmites plants are treated as needed.

Other areas at risk

In Ontario, phragmites has spread by almost 30 per cent between 2010 and 2017. Virtually every region of Ontario has been impacted by the steady advance of this plant.

NCC continues to battle phragmites — not just in the Long Point area but in the Minesing Wetlands near Barrie, Pelee Island in Lake Erie, the Saugeen Bruce Peninsula and the Manitoulin Island Archipelago in Lake Huron.

Through local partnerships with other organizations and by enlisting volunteers through NCC’s Conservation Volunteers program, the battle on phragmites is being fought on all fronts.

In the Minesing Wetlands natural area, NCC has been working together with the Nottawasaga Valley Conservation Authority (NVCA) to combat populations of invasive phragmites on conservation and private land and along roadsides. In 2017, over 20,000 square metres of phragmites were controlled along 160 kilometres of road and eight stands on conservation and private land. One stand approximately one acre in size on conservation land owned by the NVCA has been successfully controlled. It was planted with wetland plants and shrubs by volunteers in June 2018 to establish natural cover and discourage invasive species from re-entering the site.

On Pelee Island, NCC has successfully eradicated an 800-metre-long population along the shoreline at NCC's Middle Point property. On the Saugeen Bruce Peninsula, NCC has been working together with local organizations and governments for several years to manage invasive phragmites across the natural area. Mapping, monitoring, removal and spraying are all being used to combat this nasty invasive on NCC lands.

Phragmites poses such a significant environmental threat that no one organization could hope to tackle this challenge alone. Many different conservation organizations, land trusts, governments and funding partners have come together to help NCC battle phragmites on our lands and beyond: