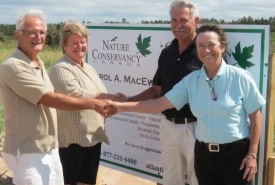 The Nature Conservancy of Canada (NCC) is the guardian of a beautiful property on the north shore of Prince Edward Island, thanks to a generous land donation by a family in 2012.

The 14-hectare (34-acre) site was a gift to NCC by a PEI family in memory of their late brother, Errol A. MacEwen.

Wishing to see the property kept unspoiled and as pristine as possible, the MacEwen family donated the area as a tribute to their brother, who loved the area that borders the Gulf of St. Lawrence.

The family appreciates NCC's mission to care for natural areas in perpetuity.

“We know that erosion and coastline problems, as well as the problems with [species at risk] that live in areas like this, is an ongoing concern. So it is just natural to think that there was this piece of land that could be put to good use,” said Todd MacEwen.

In addition to protecting habitat for species at risk (including migratory birds) and supporting thriving ecosystems, NCC is allowing the Errol A. MacEwen Nature Reserve to be accessible to the public for recreational activities such as walking on the splendid beach and photography.

Adjacent to St. Peters Harbour are the Greenwich Dunes. NCC was pleased to play a role in the protection of this natural area, assisting efforts by partners, along with the Government of Prince Edward Island and Parks Canada, the now current owner.

In 1997, the Nature Conservancy of Canada made a funding contribution towards this 370-hectare (914-acre) project.

The peninsula that separates St. Peters Bay from the Gulf of St. Lawrence became part of Prince Edward Island National Park in 1998 to protect and conserve the natural and cultural resources found in the area.

The property is located on the north side of St. Peters Bay. It contains an extensive and fragile coastal dune system, wetlands and various natural habitats in which numerous rare plant species are found.