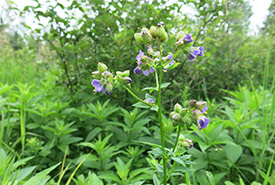 Hiding within wetlands in Quebec and New Brunswick is a small but mighty rare plant. Van Brunt’s Jacob’s-ladder is a species at risk that has joined the roster of plants with habitat protected by the Nature Conservancy of Canada (NCC) in Quebec.

The plant is found in a parcel of land protected by NCC in the Eastern Townships. Spanning an area of 31 hectares (76 acres), this land is located in Ham-Sud, about 50 kilometres northeast of Sherbrooke. Protecting this property is essential to the survival of populations of Van Brunt's Jacob's-ladder in Canada, a floral species at risk.

Adorned with dainty, purple-petalled flowers, Van Brunt's Jacob's-ladder depends on wetlands as a habitat source, and more specifically wet meadows and alder groves. This species is considered federally threatened under the Canada Species at Risk Act, and is protected provincially under the Quebec Act Respecting Threatened or Vulnerable Species. Its distribution is exclusive to northeastern North America, residing in New Brunswick and Quebec in Canada. Currently, this species has been identified in three sites in New Brunswick: one historic site where it was rediscovered in 2009, one new site was found in 2005 and one site where it may have been introduced. In Quebec, the species’ only known locations are in the Estrie and Centre-du- Québec.

Van Brunt’s Jacob’s-ladder can reach up to 140 centimetres in height and blooms in June and July. It grows in very particular environments that must have a specific moisture-level requirement. It is highly unadaptable to changes in its environment, such as flooding and/or drought.

One of the predominate threats to this species is habitat loss, and, as such, it is critical to protect habitat where the species is found. Other threats to the species include road and residential construction, agricultural practices and all-terrain vehicle traffic.

Van Brunt’s Jacob’s-ladder has difficulty thriving in heavily populated vegetated areas where there is competition for space, light and food. The plant requires that its surrounding vegetation cover be open. Scientists have observed that if the forest grows around the plant, the loss of light affects its growth.

By protecting areas where this species is found, NCC is taking steps to ensure populations of Van Brunt’s Jacob-ladder can thrive in Quebec.