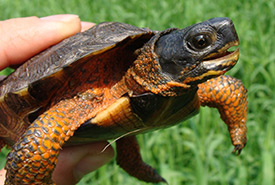 The Mauricie region is an almost mythical territory of Quebec. Singers, storytellers and film directors have sung its praises. From La Tuque to Trois-Rivières, Maskinongé to Sainte-Anne-de-la-Pérade, the majestic St. Lawrence River and its tributaries have helped the region grow and develop.

The Nature Conservancy of Canada (NCC) protects important nature reserves and the habitats of at-risk species in the region. NCC’s conservation activities are mainly conducted in the areas of Lac-à-la-Tortue, the islands on the Saint-Maurice River, the piedmont of Portneuf and the Shawinigan River.

NCC began its work in the Lac-à-la-Tortue area in 2005. The area is a large complex of wetland habitats comprised of marshes, shrub swamps with or without ponds, wooded bogs and boggy woodlands. NCC owns 48 square kilometres (4,800 hectares/11,861 acres) in the Lac-à-la-Tortue Bog Nature Reserve in the Shawinigan and Notre-Dame-du-Mont-Carmel municipalities.

The reserve is home to a number of species. Among them, Virginia fern, a rare fern with an almost black stem, can be found here. The hidden-fruit bladderwort, a remarkable carnivorous plant with floating roots that contain small traps, also grows here.

The reserve is adjacent to the Lac-à-la-Tortue Nature Reserve, a site entirely protected by the government of Quebec. In total, over 30 per cent of this complex of bogs, the largest of the St. Laurent lowlands, is protected.

In the Shawinigan River area, near the Tortue-des-Bois-de-la-Shawinigan Nature Reserve, NCC has protected nearly 300 hectares (741 acres) in the heart of the wood turtle’s habitat. This species is found within the territory of the Saint-Mathieu-du-Parc municipality, along the edge of the Parc de la Mauricie. This is the northernmost population within the wood turtle’s natural range.

Conservation of forest massifs and a maple stand

NCC’s work in the area has also helped consolidate a network of protected areas: the La Mauricie National Park and two nature reserves on private land. As a result, large tracts of forest are protected. This allows various large mammals, such as the eastern wolf, to move freely on the territory. Eastern wolf is a shy mammal easily disturbed by human activity. The species needs large, deciduous, mixed or coniferous forests to survive.

NCC also protects wetlands of great ecological value in the archipelago of Lake Saint-Pierre, between Sorel and Trois-Rivières. All in all, the organization protects around 1,000 hectares (2,470 acres), distributed over eight islands, within the archipelago. Wetland conservation in Quebec is a top priority for NCC, particularly in the context of climate change. The archipelago’s vast flood plains are the most significant on the St. Lawrence River, making up 40 per cent of the all of the river’s wetlands.

The Lake Saint-Pierre area has been recognized as a UNESCO Biosphere Reserve for the past 15 years. It shelters habitat for:

It also contains the largest heronry in North America. All of these species require a natural environment and clean water to live in good health.

NCC would like to thank the partners without whom conservation of these magnificent territories in Mauricie would not have been possible:

The conservation of the Lake Saint-Pierre archipelago wetlands was made possible thanks to the partners involved with NCC in the Eastern Habitat Joint Venture (EHJV) for waterfowl:

Many local and regional organizations are also involved at Lake Saint-Pierre: