Île de Grâce: Wetland protection is for the birds — and the plants too 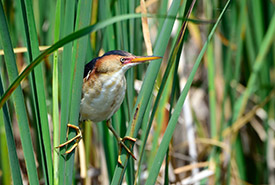 Protecting wetlands in Quebec is a top priority for the Nature Conservancy of Canada (NCC). NCC protects natural habitats on Île de Grâce, located north of Sorel in the Lac Saint-Pierre archipelago. This island is habitat for many species, including several populations of waterfowl. Protecting vulnerable wetlands, such as those in the Lac-Saint-Pierre Biosphere Reserve, means conserving important nesting and feeding habitat for migrating bird species. Bird species that migrate along the Atlantic flyway — one of Canada’s four main flyways — rely on wetlands for resting and breeding grounds.

One of the many bird species that visit this area during its migration is the least bittern. It is known to frequent wetlands and, over the last 10 years, has suffered a population decline due to the loss of these habitats. This species relies on high-quality marshes with clear water to find food and build its nest on, making it extremely susceptible to changes in water quality. Least bittern is considered nationally threatened under Canada’s Species at Risk Act (SARA) and vulnerable under the Quebec Act Respecting Threatened or Vulnerable Species (ARTVS).

Green dragon, a perennial wildflower that measures from five to 110 centimetres tall, is also found in this area. It is listed as threatened under ARTVS and is designated as special concern by the Committee on the Status of Endangered Wildlife in Canada.

These wetlands also play a crucial role in purifying and filtering water They contribute to the overall surface water quality in the area — water that species like least bittern and green dragon rely on.

“Wetlands matter to nature, to people and to the planet. We have a collective obligation to ensure their protection,” says Julien Poisson, NCC’s program director for southern Quebec. “They protect and filter our drinking water, provide habitat for fish and wildlife, buffer communities from property damage by storing floodwaters and also maintain surface water flow during droughts.”

NCC has conserved approximately 355 hectares (875 acres) on Île de Grâce. The ecological integrity of these wetlands is high due to the limited presence of exotic species and the low level of human disturbance on the land.

NCC is protecting more than 1,000 hectares (2,470 acres) across seven islands in the Lac-Saint-Pierre archipelago. The vast flood plains of this archipelago are the largest on the St. Lawrence River, which is home to 40 per cent of all the river's wetlands.