www.natureconservancy.ca > Home > Where We Work > Quebec > Sites to Discover

Lagoons as far as the eye can see (TRAIL) 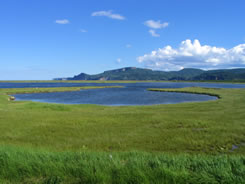 With its lagoon measuring more than 10 square kilomtres and its six-kilometre-long sandbar, the Malbaie Salt Marsh is world-famous for its ecological richness. Bring your binoculars and come meet an interpretive guide at the Barachois Information Centre at Coin-du-Banc (entrance via the Rue de la plage), opened from the end of June until mid-September.
For more information: barachoismalbaie@hotmail.com or on Facebook (in French).

See below for directions 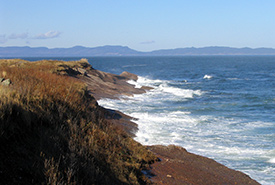 Located halfway between the towns of Gaspé and Percé, Pointe Saint-Pierre has been designated as an Important Bird Area (IBA), due to the to high concentrations of bird species found here.

NCC officially opened the Pointe Verte (Green Point) coastal trail, located south of Pointe Saint-Pierre in summer 2018. The coastal trail, punctuated by wooden footbridges, forms a 1.9-kilometre loop that travels through landscapes of breathtaking beauty, from the eastern tip of the Gaspé Peninsula. On one side, the coastline, with cliffs close to 10 metres high and breathtaking views of the Gulf of St. Lawrence; on the other, expansive flowering meadows and a dense forest, from within which the nearby crashing waves can be heard.

From October to April, visitors can see gatherings of diving and sea ducks, such as long-tailed duck, common eider and Barrow’s goldeneye. Another must-see is the LeGros House, with its traditional Loyalist style and Victorian accents that testify to the Jersey history on the Gaspé coast. Dating from the end of the 19th century, this house is renowned for its unparalleled historical cachet.

For more information about pointe Saint-Pierre >

Pointe Saint-Pierre is one of NCC's Nature Destinations in Quebec Learn more about what you can do there.

The site is accessible from the the pointe Saint-Pierre route, in the village of Saint-Georges-de-Malbaie.

See below for directions