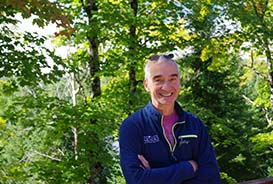 Patrick Pichette, the former CFO of Google, and his wife, Tamar, left Silicon Valley a few years ago for a new life in London, England. But that doesn’t mean they turned their backs on their love of Canada.

If he needed an excuse to return to his hometown of Montreal on a regular basis, he now has it. In 2013, Patrick and three other Canadian families became the proud owners of 20,234 hectares (50,000 acres) encompassing more than 60 lakes midway between Ottawa and Montreal. What’s more, he and his partners donated the funds that enabled NCC to acquire an adjoining 7,000-hectare (17,000-acre) corridor, rich in more than 70 rare species of plants, birds and mammals, including a unique black maple forest.

NCC is working closely with Patrick and his partners to better understand and protect the biodiversity of this unique landscape; one of few relatively untouched parcels of land remaining in the southern Laurentians.

“If you told me 15 years ago that I’d be a partner at Kenauk, I would have said you’re out of your mind,” Patrick laughs. “I’ve always believed that life is lived through experiences, not through the acquisition of property.”

But he’s also a visionary who believes in the need to give back to the community in a way that is sustainable. He and his partners donated to NCC not just to protect Kenauk, but also to ensure the land is well stewarded.

NCC and the Kenauk Institute (KI) launched an exceptional campaign chaired by Patrick Pichette which started with the 4 families who donated half of their lakeside properties to NCC. It will ensure that Kenauk is not only protected but also dedicated to the education of future generations, the study of natural sciences, and climate change and, ultimately, the Kenauk Wildlife Corridor to ensure the safe movement of wildlife all the way north to Mont-Tremblant National Park.

In the meantime, Patrick finds the time to visit as often as he can. He revels in every moment Kenauk has to offer — the squeak of his skis on fresh snow, the owls hooting across the lake while he has his morning coffee on the dock, the amazing fishing, mountain biking trails and so much more. “It’s absolutely glorious. Nature owns this place, and I’m privileged to be her guest.”

Learn more about the campaign