Strawberry Island, On (Photo by NCC) 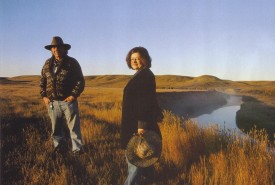 Sharon and Peter Butala at Old Man on His Back, Saskatchewan (Photo by Todd Korol)

Partnership is at the heart of all that we do. We are grateful for our supporters who have been with us year after year, sharing our passion and vision for a natural Canada. Because of your generosity we are able to continually raise the bar for conservation and to accomplish our goals.

Find out how you can help, here >