www.natureconservancy.ca > Home > Who We Are > Publications > Magazine > Summer 2018 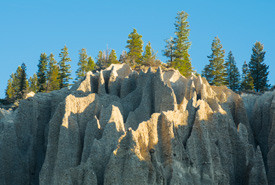 “A trail should function like a discreet aide, gracefully ushering us through the world while still preserving our sense of agency and independence.” ~Robert Moor, On Trails

Exploring and unwinding are the stuff of summer. If you’re looking to add a dose of nature to your summer holidays, come visit a Nature Conservancy of Canada (NCC) property. You never know who you might meet on the trail!

NCC is building a network of privately protected areas for Canadians to explore, in person and online, through the Nature Destinations program. From the Dutch Creek Hoodoos in British Columbia to the Musquash Estuary in New Brunswick, we are celebrating great places, species and the special people who help us care for our properties.

“NCC depends upon our neighbours to help maintain trails and signs, lead interpretive tours or share updates, such as wildlife observations, washed out bridges or downed trees from storm events,” says Erica Thompson, NCC’s senior national director of conservation engagement. “Having the support of our neighbours helps us protect nature and share our appreciation of great places, while providing meaningful experiences for visitors.”

Meet Tom, Roslyn, Alan and Treva, some of the special neighbours helping us conserve these places, while connecting Canadians and inspiring a love of nature.

Roslyn Johnson worked for NCC’s Canadian Rockies program. She became the project  lead for trail development and interpretive signs on the the Dutch Creek Hoodoos Conservation Area. “It’s a fantastic location to go for a short walk,” says Johnson. “The property has amazing views down the Columbia Valley, and beautiful flowers, once the balsamroot comes out. You never know what you’re going to see.” Johnson is particularly drawn to one of the viewpoints on the trail, where staff added an interpretive sign. There, you can look out across the lake and see a number of other NCC conservation lands, including Columbia Lake–Lot 48 and Thunder Hill Ranch. “Just seeing another NCC property from this spot is probably my favourite point,” Johnson says. “I like seeing all of our hard work on the landscape.”

She notes that there are many stories about the Dutch Creek Hoodoos, its geology and wildlife. The hoodoos feature in the Ktnunaxa First Nation’s creation story as the ribs of a giant sea monster. The area is also an important wildlife corridor and badger habitat, and a great place for birders. “When you’re standing atop the hoodoos, you see many birds, some quite acrobatic, flying and feeding. The white-throated swift in particular is of interest to birders.”

Johnson is an avid champion of this conservation area. “Before I was with NCC,  I went for a spring hike and didn’t know how special it was,” she says. “I was new to the valley, and it’s one of the classic places where visitors go, so I checked it out. Once I became involved with NCC, I learned all about why it’s so important ecologically, and it kind of all came together for me.”

Johnson now works with Parks Canada, but still enjoys visiting the Dutch Creek Hoodoos when she has the chance.

"It’s a pretty special place. It’s so big, and has such a lot of wetland and forest. And the open alvar is just gorgeous." ~Tom Wilson, President, Carden Field Naturalists

Tom Wilson has been the president of the Carden Field Naturalists for the last seven years. “I offered to take the position for two years,” he laughs. “And there’s no end in sight!” The team of field naturalists have been long-standing volunteer contributors to NCC’s work within the Carden Alvar Natural Area.

Wilson visits North Bear Alvar four to six times a year. “It’s a pretty special place,” he says. “It’s so big, and has such a lot of wetland and forest. The open alvar* is just gorgeous.” He finds the alvar makes a good lunch stop and break when out for a hike with a group.

NCC requests that visitors stay on the marked trails that wind through the property. “It takes a few hours to do the whole trail,” Wilson says. “You could hustle and do it faster, but why would you want to do that?”

As a steward, however, Wilson has to leave the trail regularly to see what’s going on across the rest of the property. “We recently discovered a small area of invasive dog-strangling vine that we’ll have to go back and take care of,” he says. Wilson also checks for trespassing. “ATVers have caused a lot of damage in the past, but our new signage has been quite effective.”

Wilson appreciates visiting the alvar with experts, such as botanists. “One group found some Cooper’s milkvetch. Now I know where to go back to each year to find it,” he says.

*A naturally open habitat with either a thin covering of soil or no soil, over a base of limestone or dolostone.

Want to read the full article? Donors who contribute $25 or more per year will receive the magazine. Donate here >