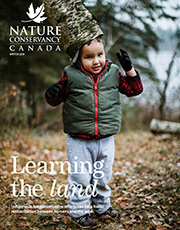 Coming the week of February 25: Learn about Indigenous-led conservation, the partnerships between Indigenous Peoples and the Nature Conservancy of Canada (NCC) to conserve lands, combating climate change with conservation...and more!

Nature conservation will help store carbon and allow people and wildlife to adapt to the changes brought on by climate change. Read more >

This gem on the Gaspé Peninsula offers natural and historic treasures. Read more >

A kinship with the land

Indigenous Peoples and the Nature Conservancy of Canada are partnering to conserve lands that thread together Indigenous values, language and culture. Read more >

Travelling up to 60 kilometres per hour, the swift fox is aptly named. Read more >

Expanding our efforts in Darkwoods, big news about the little brown bat and cross-country skiing for conservation in Quebec.

Reflecting on a blessedly long season on the Big Lake (Lake Superior) in Ontario. Read more >