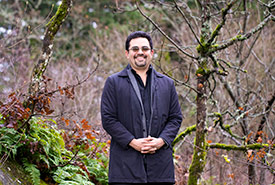 Eli Enns recalls being around 10 years old and watching his Uncle Joe carve a traditional dugout canoe on the shore of Echachist. An old whaling village, Echachist is located at the westernmost part of Canada, about a 10-minute boat ride from Tofino, British Columbia.

After watching his uncle meticulously carve away at the red cedar wood, Enns decided to explore the remote and quiet island.

“There’s not many animals on the island, as it’s quite inaccessible from the large tides ripping around it,” he describes. “As I came up over a ridge, there was a deer standing there. We were a couple metres apart and looked each other in the eye. That moment always stayed with me.”

Enns is a Nuu-chah-nulth Canadian political scientist and internationally recognized expert in biocultural heritage conservation. He is the co-founder of the Ha’uukmin Tribal Park in the Clayoquot Sound UNESCO Biosphere Reserve on Vancouver Island, where his father’s ancestry originates.

Enns also serves as the co-chair on the Indigenous Circle of Experts (ICE). ICE is dedicated to leading conservation efforts in Canada around Indigenous Protected and Conserved Areas (IPCAs) and their significance toward achieving Canada’s Target 1* in the spirit of reconciliation.

“For me, the most important and integral part of what an IPCA is, is that it’s a modern day application of very old, traditional governance models. The heart and soul of an IPCA is the language, the culture and the traditional governance values and principles,” says Enns. “Ha’uukmin Tribal Park is based on the ha’hopa and the ha’houlthee, the old laws of uyuthluk usma — the understanding of the relationship with the land.”

According to Enns, the distinction between a Tribal Park or an IPCA and a national or provincial park is that sustainable livelihoods are taken into account in Tribal Parks and IPCAs. 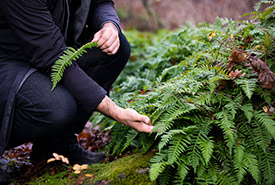 “It’s a key element in the creation of IPCAs. In order for there to be maintained healthy biodiversity, we need to continue to have a relationship with the land. Part of that relationship is using the land. It all goes back to the law of reciprocity.”

Reciprocity plays a significant role in how Indigenous Peoples in Canada interact with and care for the land.

“One thing my Uncle Levi always told me was that whenever we take something from the land, we have to give something back,” recalls Enns.

This take-less, give-more approach with the land is how Indigenous communities have lived since the start of Creation, and is something Enns practices in his personal relationship with Mother Earth.

“It was something I always knew about intellectually before I learned it experientially. It was shortly after my father passed away, and I experienced it while fishing with my Uncle Joe,” recalls Enns. “When heading home from fishing, my uncle pulled up the boat beside a small islet of rocks and asked one of us to collect eggs from the seabird nests above. I grabbed a bucket and climbed the rocks, not sure what to expect. The birds were very upset that I was there. I was an intruder on their land. It made my heart feel disturbed.”

Enns believes that through reciprocity and protecting the land, we are taking steps toward nation to nation reconciliation.

Before returning to the boat, Enns found the teaching he needed from the land — one that would shape his relationship with Mother Earth for the rest of his life.

“I found a nest, but was relieved to see that the eggs were all hatched or had been eaten by a predator. When I turned around, I saw my Uncle Joe gutting the fish we had caught and leaving it for the birds to eat. It was an exchange of energy. In that moment, it made my heart feel better. I went back out and, without a heavy heart, was able to find some eggs. This was the reciprocity that my Uncle Levi had taught me.”

*Target 1 is Canada's national initiative to conserve at least 17 per cent of our terrestrial and inland waters and 10 per cent of our marine and coastal areas through networks of protected areas and other effective area-based measures by 2020.