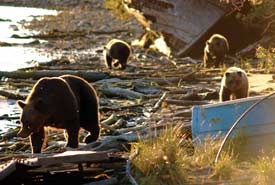 A grizzly and her cubs on the beach at Rivers Inlet, BC (Photo by NCC)

Located on British Columbia's central coast, in the heart of the Great Bear Rainforest, Rivers Inlet is a rich landscape of forest, ocean and Wuikinuxv culture. This is a land defined by grizzly bears, Pacific salmon and the deep green of cedar and hemlock trees.

The Nature Conservancy of Canada (NCC) first became involved in Rivers Inlet in 2002 as part of the Coast Information Team: a group tasked with providing independent conservation science and planning information on the central and north coasts of British Columbia, including Haida Gwaii. The team's analysis ranked the lands at the head of Rivers Inlet as among the most valuable grizzly bear habitat on the central coast. The Wannock River, which flows into the estuary at the head of Rivers Inlet, is a significant site for sockeye, Chinook and coho salmon. 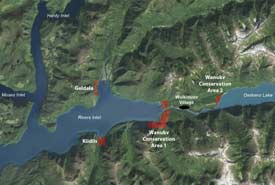 Map of Rivers Inlet, BC

Following on our conservation science and planning work, NCC has worked to enhance the considerable public land conservation achievements in the Great Bear Rainforest by conserving ecologically valuable parcels of private land in Rivers Inlet. This growing network of conservation lands supports the natural regeneration of formerly industrial lands, and provides landscape connectivity for wildlife and ecological communities.

Rivers Inlet is located within Wuikinuxv Nation territory, and is the site of their village on the shores of the Wannock River and Oweekeno Lake. NCC works collaboratively with Wuikinuxv Nation to conserve and steward the conservation lands in Rivers Inlet with respect to both traditional use and ecological sensitivities. 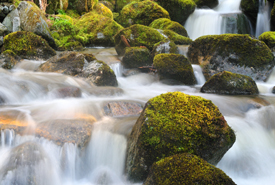 In 2006 NCC acquired the private lands that surround the head of Rivers Inlet and encompass the mouth of the Wannock River, an important salmon-bearing system. This conservation area also includes an island within the mouth of the river which is of cultural significance to the Wuikinuxv Nation as it was the site of their original village. The Nicknaqueet River also flows through the conservation area, as do several small creeks that cascade down steep slopes to the ocean.

These lands were previously owned by a forestry company and have undergone a history of timber harvesting. Since being conserved by NCC, the forest is regenerating and will return to full ecological health over time. The streamside areas, which were largely undamaged, continue to provide important habitat for salmon and eulachon, which are culturally important fish for the local community.

This conservation acquisition was made possible by generous funding from the Tula Foundation.

In 2015, the Allard family donated two oceanfront properties to NCC for conservation. Geldala and Kiidiis face each other across opposite shores of Rivers Inlet, about midway along the inlet and share similar ecological attributes: old-growth temperate rainforest fed by stream systems that empty out into estuaries. This complex of highly productive habitats supports wide-ranging carnivores and other mammals, migratory, breeding and wintering waterbirds, amphibians and anadromous fish. All five Pacific salmon species use the waters surrounding these lands.

The near-shore and intertidal habitat on these conservation lands supports a high diversity of birds, such as black scoter, white-winged scoter, brant geese and harlequin ducks. One of the largest known nesting colonies of marbled murrelets is found in the Kilbella Estuary, where Geldala is located. Large feeding flocks of ducks, geese, cormorants, loons, grebes and gulls frequent the estuary and intertidal waters of these conservation lands.

Funding for the long-term management and stewardship of Geldala and Kiidiis was provided by the Government of Canada through the Natural Areas Conservation Program and from TD Forests.

Wildlife photographed by trailcam in Wuikinuxv: 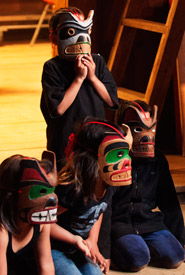 Historically, the Wuikinuxv relied on the millions of salmon that entered the network of rivers and lakes along Rivers Inlet. The fall salmon and late spring eulachon fisheries were great contributors to the local economy and the area supplied the Wuikinuxv with an abundance of western red cedar — one of the most valuable tree species to Indigenous peoples throughout the Pacific northwest coast. Cedar was used for carving and building canoes, totem poles and housing, as well as to make clothing, baskets and many other household items.

NCC is committed managing these lands for their cultural, as well as ecological, values.

Throughout the first half of the twentieth century, Rivers Inlet supported a vibrant commercial fishing industry, with 14 canneries operating in the inlet between 1882 and 1957. The sockeye salmon runs in the inlet were among the most abundant in BC until the 1970s, when the population began to decline. The canneries disappeared and the commercial fishery in Rivers Inlet was closed in 1996. By the end of the century, the sockeye population had collapsed to just 0.1 percent of its historic levels.

NCC's conservation strategy in Rivers Inlet has been to acquire former industrial lands that retain ecological significance, and to manage them for conservation, in collaboration with the Wuikinuxv. These conservation efforts aim to support the return of healthy salmon runs and the rehabilitation of the local natural environment.