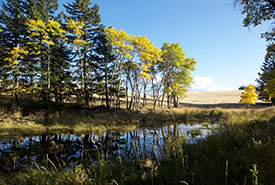 South of Kamloops in the rolling native grasslands of the Nicola Valley lies a well-tended expanse of low-lying prairie and woodland-capped hills. This is the Philip Ranch, one of the area's oldest ranching establishments. An impressive mosaic of habitats flourish here, and when passing through you can be certain to see, hear and smell the rich diversity of plants and animals that make use of the property.

Settled in 1909, the Philip Ranch has been actively run by the family ever since. With the passing of Warner Philip in 2005, his wife, Connie, initiated a conservation project with the Nature Conservancy of Canada (NCC) to honour her husband's legacy and love of the land.

In June 2011, Connie Philip and NCC announced the creation of the Warner Philip Conservation Area, which has been established through a conservation covenant now registered on 260 hectares (640 acres) of the ranch, including the original homestead site. Thanks to the generous donation of this covenant to NCC by Connie Philip, the natural integrity of Warner and Connie's beloved home ranch is protected for now and for the long term.

By placing a conservation covenant on the property, NCC and the Philip family have ensured these grasslands and the plants and animals that rely on them will be protected for the long term.

History of the Philip Ranch

In 1909, a hard-working, entrepreneurial 19-year-old travelled north from Washington state in search of land to settle. He found what he was looking for in the Thompson Nicola Valley, on the outskirts of the small town of Kamloops. The rolling grasslands of the area promised abundance to those who knew how to treat them well, and 100 years later the ranch that Peter Philip settled is still in operation.

Peter Philip's son, Warner, took over the ranch in the mid-20th century. In 1950, Warner and Connie married and settled on the ranch, where the two of them raised their large family and built a viable and well-respected ranch. Warner passed away in 2005. Now his son, Peter, runs the family business.

The Warner Philip Conservation Area was made possible by generous financial support from: