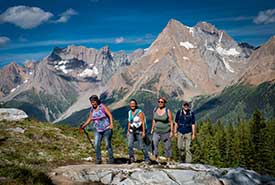 Hikers in the Central Purcell Mountains, BC (Photo by Pat Morrow)

On Saturday, January 18, 2020, the Nature Conservancy of Canada (NCC) joined the Ktunaxa Nation, Province of BC, Government of Canada, community supporters and funding partners in Cranbrook to celebrate the long-sought termination of development rights in the Jumbo Valley, in BC’s Central Purcell Mountains. The development would have occurred in an area sacred to the Ktunaxa, known as Qat’muk, which includes the Jumbo Valley.

After 30 years of uncertainty about the future of these traditional lands, the Ktunaxa Nation Council (KNC) will now be able to move forward with community consultation to ensure effective stewardship and conservation of the Central Purcell Mountains through the creation of an Indigenous Protected and Conserved Area (IPCA). An IPCA is distinguished by Indigenous creation and founded on the Indigenous relationship to land. It will serve to protect both cultural values and biological diversity in part of the Central Purcell Mountains for all time.

What has been achieved? 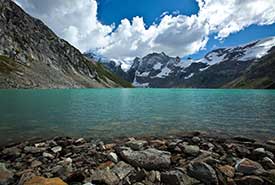 Lake of the Hanging Glacier, Jumbo Valley, BC (Photo by Lucas Jmief)

The provincial government has also agreed to prevent any new applications for leases or licenses on an area spanning approximately 62,500 hectares (154,441 acres), encompassing the Jumbo Valley and parts of adjacent watersheds. This move sets the stage for negotiations between the Province and the Ktunaxa Nation towards an IPCA encompassing this region.

What is NCC’s role in this project? 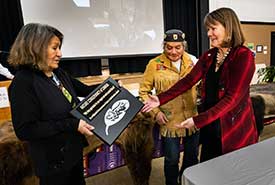 NCC is honoured to work with the KNC to help them achieve their vision of fully protecting Qat’muk. NCC was invited to help deliver the complete and permanent extinguishment of all tenures and development rights associated with the Jumbo development, and to support KNC in their ongoing conservation planning for the establishment of an IPCA.

This collaboration is consistent with NCC’s commitment to share technical skills and expertise where needed to support Indigenous conservation initiatives in facilitating the creation of IPCAs across Canada.

To support the critical step of ending any development activities in the Jumbo Valley, NCC assisted the Ktunaxa in developing the ecological rationale for protection, which was necessary to secure funding for the creation of the IPCA. NCC also acted as the negotiator with the developer (Glacier Resorts) on behalf of the Ktunaxa. These negotiations resulted in the cancellation of the Master Development Agreement, and the cessation of all current and future legal actions.

Now that the Jumbo Valley has been secured, NCC will assist the Ktunaxa with conservation planning as they move forward with realizing their vision of an IPCA in the Central Purcell Mountains.

How was this funded?

This initiative is supported by a $16.2 million contribution from the Government of Canada through the Canada Nature Fund. An additional $5 million of funding came from the Wyss Foundation, Wilburforce Foundation, Patagonia, the Columbia Basin Trust and Donner Canadian Foundation.