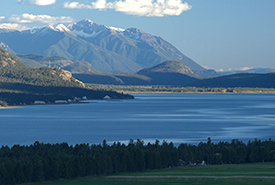 At the north end of Columbia Lake, craggy spires rise up and tower over the water. Formed as a result of thousands of years of glaciation, followed by erosion from meltwater and weather, the hoodoos stand as a testament to the grand geologic forces moving far beyond the span of human lifetimes.

The Dutch Creek Hoodoos Conservation Area was generously donated to NCC in 2005 in order to protect the ecologically and culturally important hoodoo formations. It joins several other NCC properties, such as Kootenay River Ranch, Thunder Hill Ranch Conservation Area and Marion Creek Benchlands, that together protect vital habitat and species in the Columbia Valley.

The Columbia Valley is immensely important as a wildlife corridor and as prime habitat for several at-risk species, including American badger, white-throated swift and Hooker's Townsend daisy. The dry open forest on the benchlands above the hoodoos is used by many of these at-risk species, as well as more common animals, such as mule deer, white-tailed deer and Rocky Mountain elk.

The hoodoos themselves prove to be useful for some birds whose precariously placed nests are protected from predators. Both white-throated swifts and violet-green swallows build nests on the rocky cliffs. Red-tailed hawk, bald eagle and osprey can often be seen circling high above the fields on the look-out for small prey.

How the hoodoos were formed

Millions of years ago, when the Rocky Mountains were buried under a vast blanket of ice, glaciers carved jagged peaks and deep valleys, eroding the underlying rocks into layers of gravel, sand and salt called "glacial till." As the glaciers began to melt 10,000 years ago, the Rocky Mountain Trench was filled with large lakes, and glacial till collected on the lake bottoms. The Dutch Creek Hoodoos were formed out of the remnants of this glacial lake bottom. 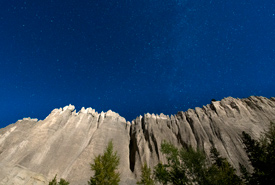 Over time, rain, wind and frost have worn away the cliffs, creating the ridges and turrets that catch the sun and create giant, warbling shadows. To this day, the hoodoos continue to change form and shape through natural weathering.

Hoodoos tend to be found in dry landscapes and may also be referred to as fairy chimneys, tent rocks and earth pyramids. They have captured the cultural imagination in landscapes such as the Colorado Plateau and the Badlands. The Dutch Creek Hoodoos are an uncontested landmark in the Columbia Valley. 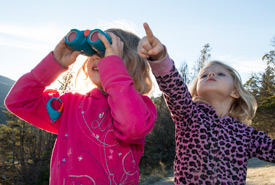 Once on NCC's lands you can enjoy a 1-kilometre loop trail that takes you out to a spectacular lookout at the top of the hoodoos. Interpretive panels along the trail showcase the ecological and cultural history of the area.

Visitors should stay on the trail and away from cliff edges, both for safety and to safeguard the sensitive ecosystem here. Please also be respectful of our neighbours by staying within the conservation area boundary.

The round-trip hike from the parking lot takes around one hour and offers a stunning panorama of Columbia Lake.

A network of conservation in the valley

The Dutch Creek Hoodoos property was donated to NCC in 2005 by James and Gaetane Ashworth.

NCC works closelty with The Nature Trust of BC to co-manage parking and trail access to our adjoining conservation areas.

In 2017, a trail improvement project was funded by the Panorama Foundation, Flanagan Foundation, Columbia Basin Trust, Habitat Conservation Trust Foundation and the Government of BC.