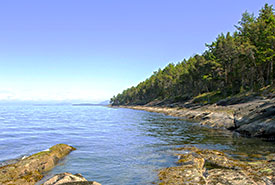 Surrounded by the Salish Sea, Mayne Island harbours one of the few remaining large, undeveloped waterfront properties among the Southern Gulf Islands. On this island’s northeast corner, Edith Point emerges as a 35-hectare relic of the lush Coastal Douglas-fir forests and rocky shorelines that used to encompass the whole island. Its diversity in ecosystems and species has been cherished for decades by the Graves family, who have cared for Edith Point since the 1990s. In 2022, the family chose to work with the Nature Conservancy of Canada (NCC) to establish a long-term conservation future for this ecologically sensitive property.

“Our family is delighted to entrust the care of this land to the Nature Conservancy of Canada. We are confident that their dedication and expertise in conservation land management will secure the best possible future for Edith Point,” said Don Graves. 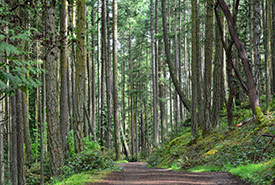 “Through a study carried out by the Mayne Island Conservancy we learned a great deal about the ecological value of the land and wanted to officially preserve the land we have been stewarding for the past 30 years,” said Don.

Edith Point has long been enjoyed by locals, who have made use of the walking trails on the property at the welcome of the Graves. NCC is continuing this tradition of allowing community access to the trails, working in partnership with the family and Mayne Island Conservancy to maintain ongoing, effective management of this sensitive landscape and protect it from overuse.

Not only does Edith Point nourish impressive stands of mature Douglas-fir and arbutus, but the conservation area also contains pockets of coastal meadow, a small wetland and over three kilometres of natural shoreline. Biologists have documented over 170 species of vascular plants, including the rare seaside juniper, growing on the rocky bluffs along the south shore. 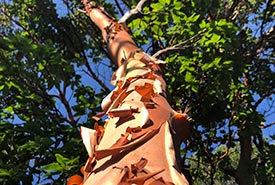 Edith Point exists in the Coastal Douglas-fir biogeoclimatic zone, which is limited in British Columbia to the southwest coast and is listed as globally imperiled by the BC Conservation Data Center. Coastal Douglas-fir forests are home to numerous rare species, harbouring provincially and federally listed species at risk. Historic assessments have revealed the presence of the elusive marbled murrelet and sharptail snake, as well as over 100 species of insects, that exclusively rely on old-growth trees in Coastal Douglas-fir forests.

The biodiversity on the shorelines of Edith Point also rivals that of its forests. On the north shore, the open Salish Sea stretches out and offers sightings of passing orcas, humpback whales and sea lions. Meanwhile, waterfowl and shorebirds flock to the south shore, where the peninsula meets the protected waters of Campbell Bay, to seek refuge and forage. Protecting Edith Point’s natural shoreline preserves the integrity of coastal habitats and its native ecosystem functions. 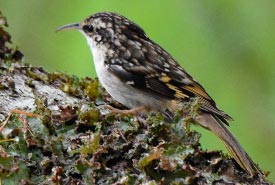 Brown creeper is one of the many birds seen at Edith Point. (Photo by David Wong)

“Edith Point is an incredibly special place. We would like to thank the landowners and Mayne Island Conservancy for inviting the Nature Conservancy of Canada to work on this project, and for trusting us with facilitating a conservation outcome for the lands,” said Steven Godfrey, West Coast Program Director, Nature Conservancy of Canada. “We look forward to working with the Graves family on caring for Edith Point and ensuring the forest, the wildlife and the community here continue to thrive.”

This project was supported by the Government of Canada’s Ecological Gifts Program. This program provides enhanced tax incentives for individuals or corporations who donate ecologically significant land.

Funding for the project was generously provided by: