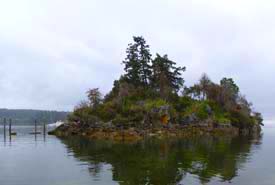 The Southern Gulf Islands are one of BC's most beautiful and ecologically unique areas. A network of large islands and tiny islets, the Mediterranean climate found here is favourable for many plants, animals and ecological communities found nowhere else in Canada.

Grace Islet may be tiny, but it has a big history. For many centuries the islet was used by the Coast Salish as a burial site. It passed into private ownership in 1913. It remained undeveloped until 2014, when the then-landowner began to build a home on the islet, despite the presence of at least 16 burial cairns.

Recognizing the seriousness of the land use conflict, which was elevated by the Coast Salish as well as the broader public, the Province of British Columbia partnered with the Nature Conservancy of Canada (NCC) to negotiate a settlement with the landowner. Negotiations were successful. This led to NCC assuming the care and management of Grace Islet in February 2015, in collaboration with nine First Nations who have historically used the islet.

“We are honoured to be part of a solution that will see the protection and conservation of the significant cultural heritage and ecological values on Grace Islet,” said Linda Hannah, BC regional vice-president for NCC. “We look forward to working with the Province and First Nations on restoring and stewarding this very special place.”

As the owner of Grace Islet, NCC has a big task to set the tiny Gulf Islet on the road to recovery. Working closely with the Coast Salish and other partners, NCC will work to restore the ecological and cultural integrity of this special place.

The first step in recovering Grace Islet is to carefully remove the half-built house on the property. Once the islet is free of the building, proper restoration of the vegetation and burial cairns can proceed. 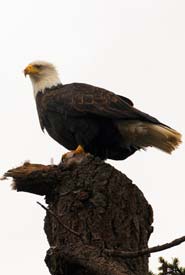 An eagle on Grace Islet (Photo by Tim Ennis/NCC)

Despite its small footprint, Grace Islet has strong conservation values that make it a good fit for NCC's work in British Columbia. The West Coast is a key focal area for NCC. The area's natural spaces are facing heavy pressure from development. Our conservation mapping and strategic planning shows that the Southern Gulf Islands are a top conservation priority. The work that we can do here is both urgent and extremely valuable

Small islands and islets are of particular interest to conservation. These islands and islets can be great protectors of the area's natural biodiversity. They are less likely to have invasive plants and animals disturbing the natural ecosystem, and can act as seed banks for the native plants of this area.