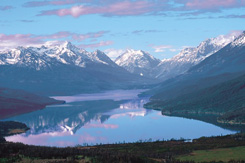 Once in a while we encounter a unique opportunity to secure a large, intact ecosystem before it becomes significantly altered by human contact. British Columbia’s Tatlayoko Lake Valley offers such a chance.

This stunning valley in BC's West Chilcotin is a critical link between the rainforests of the Pacific Coast and the dry, desert-like conditions of the Central Interior, making it a critical hub for many wildlife corridors and migration routes. For waterfowl like the majestic trumpeter swan, the wetland complex around the Homathko River provides a significant stopover habitat as they follow the valley's natural corridor on their spring and fall migrations. In addition to this wetland ecosystem, old-growth Douglas-fir forests and the Homathko River attract wide-ranging carnivores, such as grizzly bear, cougar and grey wolf that traverse the valley, and mule deer that graze the meadows.

The small but close-knit human community of the Tatlayoko Valley is vibrant and deeply engaged with the land. Ensuring that the valley retains its ecological communities and the natural processes that sustain them while respecting the interests of human residents of the area are essential to the Nature Conservancy of Canada's (NCC's) work in the region.

Conservation projects in the valley 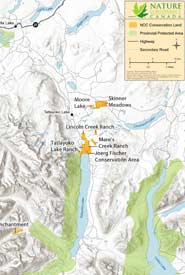 NCC's conservation work in the Tatlayoko Valley began with the acquisition of Tatlayoko Lake Ranch in 2000.

Dominating the north end of Tatlayoko Lake, the 217-hectare (536-acre) Tatlayoko Lake Ranch sits in a prime location for subdivision and resort development. The previous owners, Joerg and Hannelore Fischer, had other ideas, however, and they worked with NCC to conserve the ranch property in order to retain the valley's natural integrity and protect it for generations to come. Thanks to the Fischers' contribution, the conservation area's wetlands, old-growth Douglas-fir forest and accompanying biodiversity continue to thrive.

Following the conservation of the Tatlayoko Lake Ranch, NCC partnered with other landowners through donations, property purchases and a conservation agreement to create a network of protected lands in the valley that totals more than 1,100 hectares (2,700 acres).

In 2016, NCC once again partnered with Joerg and Hannelore on a conservation project in the valley. This time, the couple donated their last land holding in the valley to NCC, completing a 15-year effort to build a permanent conservation legacy in Tatlayoko.

“Hannelore and I are really proud of what we have done here in Tatlayoko," said Joerg. "We promised ourselves we would conserve this beautiful place, and now, thanks to our partnership with the Nature Conservancy of Canada, we have fulfilled this dream.” 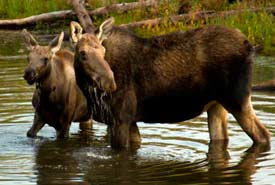 Cougars and wolves frequent the area and mountain goats can often be spotted on the cliffs directly above Tatlayoko Lake Ranch. In spring, grizzly bears move in as they head towards the salmon run in the upper Chilko River. The upper Homathko River winds through the area, forming a biologically rich wetland area that is a crucial staging area for migratory songbirds and waterfowl, including trumpeter swans.

Every August and September, as migratory birds journey south for winter, tens of thousands follow the Tatlayoko Valley to avoid the formidable ice fields and peaks of the Coast Mountains. Many pass through the Tatlayoko Lake Ranch, stopping in the conservation area's large riparian and wetland area to rest and refuel. These factors make the area ideal for monitoring bird migration.

From 2006 to 2015, NCC operated a bird observatory on the ranch to monitor the annual migration of these birds on their journey south. During that time, birdbanders, with the help of many volunteers, banded more than 15,000 birds and catalogued 187 species in the valley. The team also conducted a daily census of birds in the area, recording sightings of swans, raptors, owls and many other species not normally caught in the mist nets.

NCC contributed its data to the Canadian Migration Monitoring Network, part of a world-wide database that monitors bird population trends and supports efforts by scientists and conservationists to overcome threats to bird populations.

In 2017 the operation and management of the Tatlayoko Lake Bird Observatory was transferred to BC Spaces for Nature. Find out more at tatlayokobirds.wordpress.com.