Midgeley, BC (Photo by Steve Ogle) 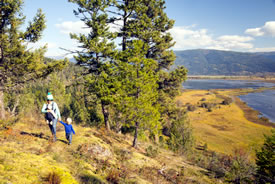 Midgeley, BC (Photo by Steve Ogle)

The Midgeley Conservation Area is the newest addition to the Nature Conservancy of Canada's (NCC's) wildlife corridor initiative in southeastern British Columbia. The project aims to make it easier for an isolated population of grizzlies to connect with a larger bear population to the east.

The initiative targets lands in the Creston Valley that are frequently used by an at-risk population of grizzly bears to move between the Selkirk and Purcell mountains. The corridor is aptly named the Frog Bear Conservation Corridor for the two important species that will benefit from these conservation efforts: grizzly bear and northern leopard frog. So far four properties have been conserved as part of the corridor project.

Connecting the threatened South Selkirk grizzly bears with the larger grizzly population to the east is critical to the long-term prospects for this species in this corner of the province. Biologists have identified the lands being conserved as key areas used by bears as they move through the valley.

Midgeley is a 65-hectare (162-acre) Douglas-fir forest. The property is located on the western edge of the valley, which serves as a gateway for bears moving down from the mountains. Located next to the Creston Valley Wildlife Management Area, the land was purchased from Creston-based Wynndel Box and Lumber.

The South Selkirk grizzly bear population is considered threatened, in large part because of being cut off from the larger bear population to the east in the Purcell Mountains. This valley is also the only known breeding location in BC for the endangered northern leopard frog.

A number of other rare species have been documented in the Creston Valley, including northern rubber boa, great blue heron, American bittern and western screech-owl.

The Yellowstone to Yukon Conservation Initiative (Y2Y) played a key role in this project. The joint U.S.-Canada organization works to ensure that wild animals are able to move through and around human communities and activities within the 1.3-square-kilometre Yellowstone to Yukon region. Y2Y provided half the purchase funds for the property. It also helped fund the research that identified the significance of this parcel.