A flock of birds in the Central Coast (Photo by NCC) 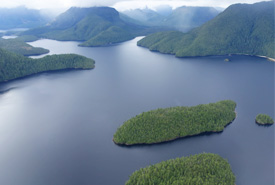 In the central region of British Columbia's west coast, the coastal temperate rainforests contain more living matter than any other ecosystem on the planet. This is one of the last places on Earth where large, pristine expanses of these ancient rainforests remain. The natural area supports abundant runs of Pacific salmon and populations of bears, including the iconic Kermode or spirit bear. Varied and rugged landscapes characterize this region: low-lying islands, steep-walled fjords and channels, coastal plains, high mountains and valley bottoms.

Part of the iconic Great Bear Rainforest, this area contains biodiversity hot spots like estuaries. These are naturally rare transition zones between fresh and salt water. Estuaries are the focus of the Nature Conservancy of Canada's (NCC's) work here.

This natural area spans across the traditional territories of the Heiltsuk, Kitasoo/Xai’Xais, Nuxalk and Wuikinuxv First Nations.

Traditionally, forestry has been the major threat along the Central Coast. High-profile, international campaigns to save the Great Bear Rainforest have inspired collaboration between governments, Indigenous groups, non-profit organizations and industry. Together, these groups are attempting to implement sustainable resource-harvesting practices and to establish new protected areas.

NCC has been involved in this natural area since the acquisition of the Koeye Estuary Conservation Area in 2005. In the following decade, NCC acquired 766 hectares (1,893 acres) here. The next stage will prioritize building relationships with local communities to better protect this remote area's natural values. 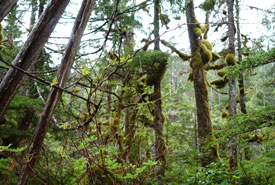 Situated at the head of a watershed, the Ellerslie Lake property protects habitat for grizzly bears, marbled murrelet and northern goshawk. Migratory birds use Ellerslie Lake as a stopover on the Pacific Flyway.

The Gullchucks Estuary brings together huge stands of old-growth coastal rainforest. It also boasts a wild salmon-bearing river, a floodplain and estuary, all of which provide habitat for hundreds of coastal species. Learn more> 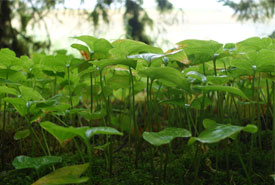 The Koeye River Estuary has been identified by scientists as one of the most outstanding estuarine areas in British Columbia. It is listed as a protected area under the Great Bear Rainforest agreement. Together with the adjacent Namu watershed, the Koeye represents one of the largest complexes of ancient forests on the Central Coast.