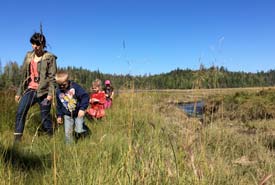 Haida Gwaii, formerly known as the Queen Charlotte Islands, earns its nickname as the "Galapagos of the North" because of the incredible diversity of species and ecosystems unique to its islands. The rich natural diversity results from a combination of two types of water: the cold, nutrient-rich waters of the northern Pacific, and warm, offshore currents originating from Japan.

The Haida Gwaii Natural Area is made up of two main islands — Graham and Moresby — and more than 350 smaller islands. The Nature Conservancy of Canada (NCC) works to protect these terrestrial, freshwater and marine ecosystems.

This is the traditional territory of the Haida Nation, whose communities continue to thrive here. Resources such as salmon and old-growth cedar trees, both key species for conservation, hold high cultural importance.

Threats to this area include:

Despite pressures, Haida Gwaii's estuaries and freshwater systems were assessed in 2008 and found to be functioning well, with little need of management or restoration. NCC's goal is to sustain the region's ecological integrity over the long term.

It is thought that these islands were a refuge from the full impact of the last ice age, leading to the presence of genetically distinct plants and animals that are not found anywhere else on Earth.

NCC's involvement on Haida Gwaii began in 1997. We assisted with the relinquishment of underwater oil and gas development permits, making way for the Gwaii Haanas National Marine Conservation Area. 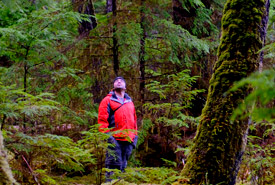 The Kumdis Estuary is an ecologically significant area with many outstanding cultural heritage and ecological features. Salmon-bearing streams, estuaries and old-growth forests are protected in a network of conservation lands.

NCC is pleased to partner with the Haida Nation in protecting and restoring valuable lands on the estuary. Learn more >

In the 1990s, the Government of Canada pledged to establish a marine conservation area on Moresby Island. The government contracted NCC to negotiate the relinquishment of underwater petroleum permits within the area.

The Gwaii Haanas National Park Reserve and Haida Heritage Site was officially designated in 2010. It is the first protected area in the world that spans from sea floor to mountain summit.