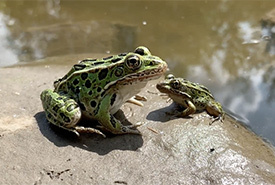 As soon as April starts, northern leopard frogs make their way from deep waters, where they spent the harsh winter, to shallow wetlands. Here, they begin courting for a mate. In British Columbia, the “low snore” of the male’s breeding call can be heard from the wetlands in Creston Valley, where this species’ last breeding habitat in the province is located.

Here in the biodiverse Creston Valley, where wetlands are recognized internationally for their ecological values, the Nature Conservancy of Canada’s (NCC’s) Frog Bear Conservation Corridor protects and enhances valuable habitat for the endangered amphibian.

Protected since 2012, Frog Bear functions as a wildlife corridor for the species that it derives its name from: northern leopard frog and grizzly bear. The last remaining wild population of northern leopard frogs in BC rely exclusively on the wetlands of Creston Valley to breed, while grizzly bears frequent these lands as they cross through the valley.

“Although northern leopard frogs were once common across North America, populations in western North America have declined precipitously since the 1970s,” said Richard Klafki, NCC’s Canadian Rocky Mountains program director and a member of the Northern Leopard Frog Recovery Team. “Historically, the primary threat was habitat destruction resulting from wetland draining and reclamation in the early to mid-1900s.”

After a long history of intensive agriculture that drained wetlands and altered waterbodies in the Creston Valley, NCC wanted to improve the ecological integrity on our Frog Bear lands to protect the province’s dwindling population of northern leopard frogs.

Restoring the past for the future

The health of a wetland can often be determined by the presence of native amphibian species. In Creston Valley specifically, northern leopard frogs signal wetland health, according to Richard. “Frogs transport nutrients and minerals between the aquatic and terrestrial components of the ecosystem.”

Northern leopard frogs consume micro-organisms in fresh water. As they are hunted by larger carnivores, the species plays a significant role in the transfer of nutrients upward in the food chain. 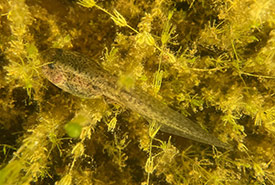 In 2021, NCC began a two-year initiative on the Frog Bear lands to restore the healthy freshwater habitats here that once supported these northern leopard frogs — from larvae to adults — and other wetland-dependent species that make up the native ecosystems of Creston Valley.

With the help of earth-moving machines, the fields that had displaced the historical wetlands were transformed into three new wetlands, totalling two hectares. As northern leopard frogs prefer diversity in their breeding and foraging habitat, these new wetlands vary in depth, shapes and sizes. They are also designed to dry out after the northern leopard frogs have gone through their breeding cycle so that the ponds cannot be colonized by invasive American bullfrogs.

To maintain healthy wetland ecosystems, native plant biodiversity in the green zones between shorelines and uplands — also known as riparian areas — must be restored as well. From cottonwood and dogwood trees, to saskatoon and hawthorn, these riparian plants stabilize shorelines, are food sources to mammals and attract invertebrates — a food source for northern leopard frogs. To support their growth, NCC recontoured a former creek in order to ensure a steady supply of fresh water for riparian habitats.

It's a team effort

While NCC is restoring wetland habitats for northern leopard frogs, the Wilder Institute/Calgary Zoo is working to recover this species’ population in BC with breeding, release and re-introduction programs.

“Captive rearing and re-introductions are critical to the long-term recovery of northern leopard frogs,” said Richard. “This summer, our partners at the Wilder Institute/Calgary Zoo released some tadpoles into restored wetlands on one of our conservation lands near Kimberley.” 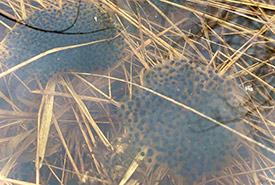 Similar to habitat restoration, reintroducing species doesn’t stop at their release into the wild. The Wilder Institute/Calgary Zoo is currently conducting research into northern leopard frog populations in western Canada and the U.S., hoping to answer the question of why the frogs face challenges in sustaining populations.

Meanwhile, as Richard waits for the winter, he hopes that native northern leopard frogs will find the restored wetlands at Frog Bear Conservation Corridor helpful as they travel between breeding habitat and wintering habitats in the Creston Valley. Despite their small stature and the challenges they face for survival, Richard is sure that the northern leopard frogs will continue to contribute to the health and resilience of the Creston Valley as they play their own unique role in the ecological community here.